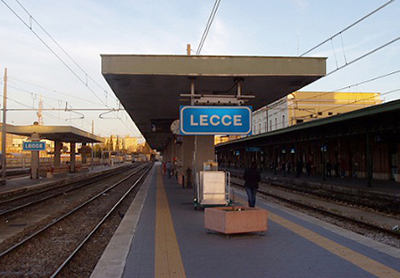 Compare & Save on car rental in Lecce

Renting a car at Lecce Central Station is the best way to explore this beautiful city, and to discover wonderful Salento. Coming by train means optimising costs and saving so much time. Once you arrive here, it can be really a pity not to have the chance to explore the city centre and its surroundings, so renting a car is the most suitable alternative for those who want to arrange their stay in the best way possible, taking into account all different aspects that may make it unique.

Things to do in Lecce

Renting a car in Lecce means having the opportunity to explore the beautiful old town in a very short time, and stop to admire the magnificent Cathedral. The city of Lecce is a precious gem of Salento: old churches, great food and cordiality, the convenience of a cheap car rental at Lecce Central is the icing on the cake.

Once you’ve visited the city of Lecce, you can venture out to explore Salento, which is considered one of the most beautiful areas of Italy in terms of natural beauty and richness of traditions. If you are looking for a low cost car at Lecce Central Station and you don’t feel like getting lost in endless queues when you arrive, then GoCarRental.com is the right solution for you. On this website you can choose which rental car you prefer, deciding among hundreds of alternatives in terms of model and price. You’ll be able to arrange all the details of your stay directly from your PC or smartphone, and it won’t costs you much! What are you waiting for? Go on GoCarRental.com, and start planning your trip to Salento now!