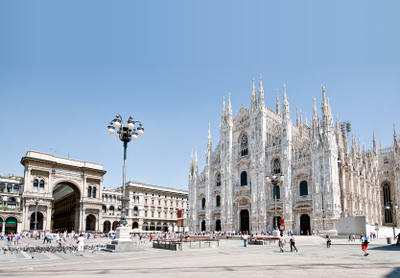 Compare & Save on car rental in Milan

Milan is the capital of the Lombardy region of Italy, and the second largest city in the country. It has flourished since Roman times as a commercial and financial centre, and over the centuries it has been overrun and claimed by France, Austria and Spain, until it became part of the new Kingdom of Italy in 1859. It was at the forefront of the industrialisation of Italy in the last century, and has subsequently also established a global reputation as a centre of haute couture fashion and design. The city’s many galleries and museums attracts more than two million visitors annually, and the business centre houses Italy’s main stock exchange, the Borsa Italiana. Milan is a great base from which to explore Northern Italy, having excellent road links to Bergamo, Lake Como, and Turin to the west. Car rental is available either from the airport or from one of the many rental companies in Milan itself. To find the best deals for car rental in Milan explore the options right here on GoCarRental.com.

Things to Do in Milan

Any visitor to the city will be spoilt for choice, given the number of fascinating historic and artistic treasures in Milan. Unmissable is Leonardo d Vinci’s Last Supper at the church of Santa Maria della Grazie, and as long as you don’t suffer from vertigo, another must is ascending the Duomo, Milan cathedral being the third largest in Christendom. You will gain a clear view of the Alps and over the city from the rooftop of the cathedral, and at ground level, you can admire some of the 3,500 statues and 135 spires that decorate the exterior of the church.

The Golden Rectangle and Via della Spiga

The Castello Sforzesco is one of the major attractions of the city, housing twelve museums which take the visitor through the history of the area from Palaeolithic times through to the 1950s. Window shopping in Milan’s designer area, the Golden Rectangle, can be a delicious day’s activity, taking in lunch at one of Milan’s many outstanding restaurants. As an alternative to browsing the designer stores, you can relax on a cruise down the canal that links the Rivers Po and Ticino, the banks lined with little boutiques, bars and cafes. Outside the city, Lake Como is a short drive away, and will transport you to another world, of blue waters, towering mountains, and small colour-washed villages and towns.

From Milan airport to city centre is a 45 minute drive on the A8 toll motorway. Milan has a ring road, the Viale Umbria, that encircles the city, but you will definitely need a satnav in your car rental to find your way around the urban sprawl on the outskirts of the city, and some of the more complex and pedestrianized areas in the centre. Radiating from the hub of the ring road are a series of major motorways, giving easy access to Italy’s major cities in the north – Genoa, Verona, Turin and Bologna.