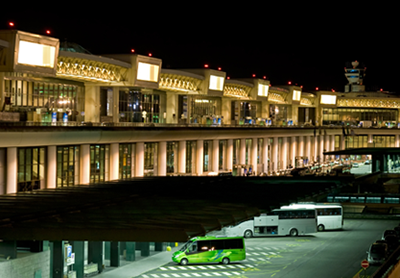 Milano Malpensa is the most industrious t international airport in Northern Italy, some 48 kilometers north-west of Milan and comfortably within reach with a rental car. The way to reach it is fairly simple, provided that you pay attention to which terminal you are departing from or arriving to. Specifically, Milano Malpensa Terminal 1 is the intercontinental part of Malpensa. It has a wide range of flights heading to Italian, European and Extra-European destinations, and this makes it a pivotal hub. On the other hand, Milano Malpensa Terminal 2 is devoted to low-cost flights. To reach either terminal, there is a shuttle travelling 24/7, leaving every 7 minutes on daytime and every 30 minutes at night (10.45pm to 5:15am). If you have just landed in Milan, there are plenty of car hire firms active here, along with some low-cost local agencies. Milano Malpensa is located in an area linking several cities of Lombardy. Renting a car at the airport makes it also quite easy to reach Piedmont or any other Northern region. Notably, Milano Malpensa airport has many flights arriving not only from the major European cities but also from the United States, Japan, and Middle East, so that Malpensa is often seen as an important entrance gate to Milan itself and to Northern Italy in general. At the airport you can take advantage of ATMs and full-banking services, currency exchange and money brokers, payphones, internet wifi, and fax. Other services present are: pharmacies, travel agencies and in both terminals baggage rooms and first aid assistance. There is also a wide choice of restaurants in Malpensa, along with several bars and a cocktail lounge. A selection of boutiques can be found in Terminal 1, while duty-free shops are available in both terminals. Finally, there is a four-star hotel between the two terminals and Hotel Villa Malpensa just in front of Terminal 1.