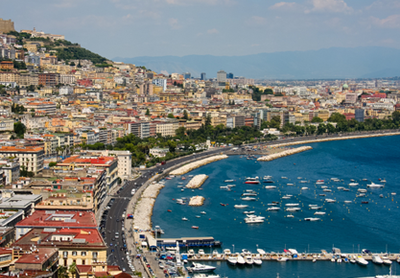 Compare & Save on car rental in Naples

Naples is one of the oldest continuously inhabited cities in the world, unsurprisingly given its sheltered location on the Gulf of Naples in south-west Italy. It was settled by the Greeks in the Bronze Age, and then became a significant centre for the Romans before becoming the capital of the Kingdom of Naples until the unification of Italy in the 19th century. Sadly it was the most-bombed city in the country during the Second World War, and so much of the wider city was reconstructed in the last century, although its historic city centre is still the largest in Europe and is intact enough to be listed as a UNESCO World Heritage site. Close to Naples are the Roman towns famous for having been preserved under the flows of volcanic lava and ash when Vesuvius erupted – Pompeii and Herculaneum. There is also a whole hidden city below Naples – of catacombs, and Greek and Roman cisterns and waterways – some of which can be visited. The location of the city makes it perfect for visitors who want to arrange car rental to explore the coast or visit the island of Ischia.

Things to Do in Naples

Naples has endless wonderful historic churches, piazzas, castles and museums to visit. Try the Museo di Capodimonte, based in the old Bourbon palace, for an overview of the history of the city, from the Greeks and Romans to the modern day. The interior of the 14th Century Cathedral of Naples is a revelation, not expected from the 19th century neo-Gothic exterior, and you will discover the oldest surviving baptistery in Europe, and the Greek, Roman and Paleochristian ruins that were discovered during excavations in the 1970s.

The catacombs of Naples were famous, and the storage of bones and the skulls of the dead in hypogeums continued for many centuries until the disapproval of the Church brought the tradition to an end. The hypogeum at Santa Maria del Purgatorio can still be visited on a Sunday. Being the home of the pizza, no trip to Naples is complete without trying varieties of the local pizzas and it’s probably best to look outside the main tourist areas to find the most authentic examples. It’s worth setting aside at least a day for a visit to Pompeii or Herculaneum, with their still-intact street plans, frescoed walls, and figures frozen for ever in the act of fleeing from the rage of the volcano.

The airport is only a 9 minute trip from the city centre, and any visitor staying in Naples might be well advised to plan their itinerary so that they explore the historic city initially before picking up car rental in Naples itself, or from the airport collection point to tour the coast and the wider area. Driving in Naples is not for the fainthearted! But the road links around the city are good, with the A56 and A3 motorway leading to the east and west of the city, and alternative local roads providing a more scenic route along the coast. The A1 links Naples with Rome.