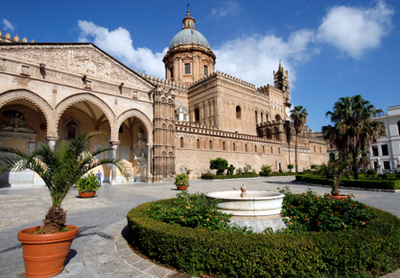 Compare & Save on car rental in Palermo

Palermo is the capital of Sicily, and the original city was founded by the Phoenicians, with the Greeks renaming the city “Panoremus”, or “always fit to land in”. The city has had many masters, passing from the Greeks to the Romans and then to the Byzantines, becoming an emirate under Arab rule for two hundred years, until 1072. Reconquered by the Normans, Palermo became the capital of the Kingdom of Sicily, which continued until the unification of Italy in 1860. Palermo today is a thriving hub of tourism and commerce, and is home to the island’s second university. There is careful and ongoing restoration of many of the historic houses and sites in the city to preserve them for the future. Most visitors will arrive by air at Palermo International Airport, and arranging car rental from Palermo airport is easily done through GoCarRental.com.

Things to Do in Palermo

The interior of the 1,000 year old Norman Cathedral is magnificently decorated with mosaics and carvings, and is one of the unmissable sights of Palermo. The Palazzo dei Normanni is considered to be one of the finest Arab-Norman structures in the world, and as well as the royal aprtments, there are also extraordinary mosaics to be seen in the capella. The Teatro Massimi was completely refurbished in the 1970s, and offers an evening programme of outstanding performances, as well as day tours of the building and behind the scenes for visitors.

Catacombs of the Capuchins

For those who are not easily spooked, a visit to the catacombs of the Capuchins will provide a memorable visit. An extraordinary gathering of memento mori, with more than 4,000 friars and the same number of local residents preserved in the Catacombs between the 16th century and the early 20th century. Using secret embalming techniques, some bodies are preserved standing, others lying in their rich finery, and skulls have been patterned into mosaics and displayed in massed ranks. For a day trip from Palermo, getting up close to the still active craters of Mount Etna is something not to be missed, and the drive along the coast road to the volcano is spectacular enough in itself. You can explore the side of the mountain on foot, or take the cable car up to the craters.

Palermo is a relatively small and compact city, with the E90 motorway running directly from the airport and just by-passing the city itself, with the SS113 peeling off the motorway and providing the visitor with a scenic drive down the wonderful Lungomare Colombo which follows the length of the seafront. If you have car rental, there are endless opportunities to explore the breath-taking coastline, as minor roads encircle the island, and you can take day trips to some of the picturesque villages that perch on the edge of the coast.