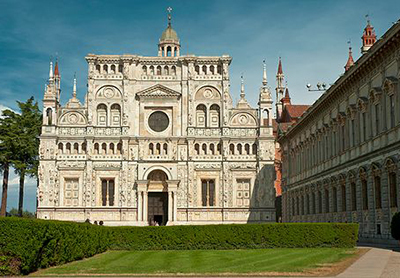 Compare & Save on car rental in Pavia

Hiring a car in Pavia is an opportunity to discover an ancient land that never ceases to amaze. Book your perfect solution, and you will have what you want in just a few clicks.

Things to do in Pavia

Pavia was built on the left bank of the Ticino, and it is no doubt the most beautiful town of Lombardy. Pavia was elected the capital of the kingdom by the Lombards in the sixth century, and then it became a Ghibelline town in Dante’s era. It was precisely in those years that Pavia became so famous. Indeed, it became the seat of a very important university, like Bologna and Padua, where Petrarch used to study and where Alessandro Volta was professor. Start your city tour from Strada Nuova, the main central thoroughfare of Pavia since ancient times, then head straight for the great Visconti Castle, built largely of brick - the famous pink brick of Pavia - rebuilt in the late fifteenth century after it was damaged by the battles of the League of Cambrai. Enjoy the numerous beautiful churches, from the Dome to St. Pietro in Ciel D’Oro, not to mention the stunning church of St. Michele, built on an ancient Lombard church where many emperors were crowned, and was later renovated in Romanesque exterior forms and and Gothic touches inside. Then drive your rental car to Ponte Coperto, a fourteenth-century bridge that has been restored several times, heading to the most famous building around Pavia, that is the Certosa delle Grazie. Built in 1396 by Gian Galeazzo Visconti, it was then completed at various times, but it was the monument that best celebrated the Lords of Milan. Take some time to discover this jewel nestled among the industries of Lombardy, without forgetting to visit the typical inns where you can taste top-quality food and wine. You’ll definitely appreciate the risotto with frogs and fried frogs, accompanied by wines and mushrooms of Oltrepò area, with an appetizer of goose salami and the traditional Pavia soup.

Get in your vehicle and head to discover the surroundings, from Belgioioso to Abbiategrasso, from St. Lanfranco to Stradella, home of the accordion, finally touching Vigevano and Voghera, places that will make your experience in Pavia unforgettable. Don’t miss the chance to see with your own eyes one of the moral capital of Italy. Choose the offer that you want on our website, and your holidays will never be the same.