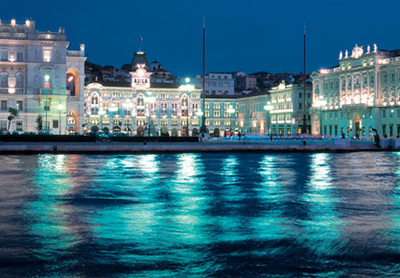 Compare & Save on car rental in Trieste

Trieste lies in the very north-eastern corner of Italy, with the border of Slovenia at its back and fronting the Adriatic. You will need a car both to get to the city most easily and to explore the hinterland, so plan in advance for car rental. Visitors to Italy will often overlook the charm and historic streets and piazzas of Trieste in favour of the country’s more famous cities. But Trieste has a fascinating history and the grandeur of its heyday under Austrian rule can still be seen in the neo-classical buildings and vast open squares. In the 19th century Trieste was one of the most important ports of the Habsburg Empire, and it also emerged as a city of literature and the arts in the 19th century. In the early 20th century James Joyce lived there for a while, supporting himself and his family by teaching English whilst he wrote. After the First World War Trieste was annexed to Italy, but the status of the city was again cast into doubt after the Second World War, with Trieste being briefly declared an independent city state under the protection of the United Nations. With some continuing shifting of the borders between Slovenia, Croatia, and Italy, the boundary was finally settled in 1975 – Trieste itself had been returned to Italian control in 1954.

Things to Do in Trieste

The two areas of the city that repay exploring on foot are the seafront and the old town. The seafront is magnificent, with the modern seaport visible at one end of the promenade, and the stately row of neo-classical houses lining the promenade and opening out into the vast Piazza Unita d’Italia which runs back from the harbour. Cruise liners regularly visit Trieste, and sometimes come close in to the seafront, providing a spectacular view at night-time, when they appear like a floating illuminated city.

The main town square, the Piazza Unita d’Italia, faces the Adriatic Sea, and is surrounded by the grand municipal buildings of the Austrian 19th century occupation. The old town – the Citta Vecchia – is almost entirely pedestrianized, offering the visitor to explore the narrow streets without having to dodge traffic. The Arco di Riccardo is a Roman arched gateway now standing in the Piazzetta Barbacan in the old town. Trieste Cathedral can boast some outstanding Byzantine mosaics, and much more recent, but with a poignant history, is the Synagogue of Trieste, one of the largest synogues in Europe. Just outside the city the pretty Castello di Miramare stands on a small promontory, and is well worth a visit. It was built in the 19th Century for the Austrian Archduke Ferdinand and his wife.

The nearest airport to Trieste is the Friuli Venezia Julia airport, which is a thirty-eight mile drive from the city. Arranging car rental for your stay in Trieste through GoCarRental.com enables you to collect your rental vehicle from the airport and take the easy drive on the E70 to Trieste, enjoying the glorious coastline and the mountains ranged behind you as you go. The city is a great base from which to explore both Slovenia and Croatia, but make sure that you have informed your car rental company in advance of your plans if you wish to do so.