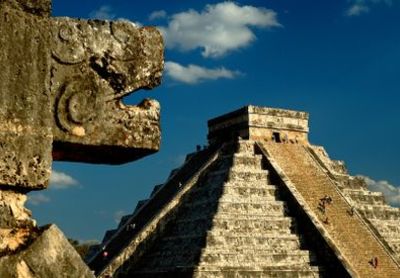 Compare & Save on car rental in Mexico

Fiestas, food, green jungles, sizzling deserts, and vast bustling cities – Mexico certainly is a country of contrasts. In the searing heat, it’s a passionate place that’s not only one of the most popular tourist destinations in the world, but also home to aching poverty and a long-running drug war. Despite recent turbulence, Mexico remains a fascinating, magnetic country that stills draws curious visitors from far and wide, especially to its beautiful beach resorts. Located in North America, sandwiched between the USA to the north, and Guatemala and Belize to the southeast, its huge coastline stretches along the Gulf of Mexico, the Caribbean Sea and the Pacific. Warm weather, unique cuisine, art, archeology, pyramids, Haciendas, golf courses, excellent fishing, destinations like Acapulco, Cancun and Los Cabos, keep Mexico ranked as the 7th major destination for foreign visitors, according to the World Tourist Organisation.

Things to Do in Mexico

No visit to Mexico is complete without a tour of Chichen Itza, the majestic Mayan city, declared a UNESCO World Heritage Site in 1988, and recently voted one of the New Seven Wonders of the World. But it isn’t the only jawdropping ancient Mayan city to visit, there’s also Coba, El Balam, El Tajin, Monte Alban and Teotihuacan to explore, as well as Tulum on the Caribbean coast. If you’re something of a water baby, then coastal resorts like Cancun and Acapulco will never fail to impress, while the Sea of Cortez is a prime place for witnessing whale birthings, swimming with dolphins and more. If it’s the bustle of the city you crave, make it Mexico City, one of the three largest in the world, and a sophisticated urban hub with a 700-year history. In Mexico City, you will find everything from parks, Aztec ruins, colonial architecture and museums, to hip nightlife and chic shopping too.

Driving into Mexico from the US isn’t the quickest route, due to long delays at border crossings (blame that aforementioned drug war). However, once you’re in, you’ll find the best roads are toll roads, which can be relatively costly (400-800 pesos is common on longer trips) but are much faster and better maintained. Driving during the daytime hours is still recommended in rural areas, while driving at night is far safer in urban areas. Foreign driver’s licenses are recognized and recommended here, as is insurance, which will be available from your car rental company – US driver’s insurance is not valid in Mexico.