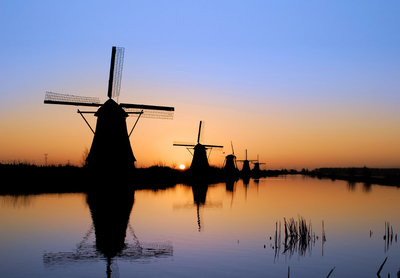 Compare & Save on car rental in Netherlands

The Netherlands, often also known as Holland in the UK, is a small European country bordered by Germany to the east and Belgium to the south, famous not only for its system of dikes and waterways that have drained much of the land which lies below sea level, but also for the traditional windmills that scatter the landscape and for the fields of tulips cultivated in the spring. The Netherlands today is a thriving and successful country, having recovered from the Nazi occupation of World War Two, and the major damage to the country’s infrastructure caused by German and Allied bombing, and become a founder member of the European Community in 1957. Rotterdam is the largest port in Europe, and Amsterdam one of the continent’s most popular tourist attractions. The Hague is the seat of the government and the home of the Dutch royal family. Delft, Utricht and Maastricht are historic cities that draw many visitors, and the country’s major international airport is Schipol, near Amsterdam.

Things to Do in Netherlands

Although public transport in the Netherlands is good, to fully enjoy the sights a car is essential, and booking ahead of your trip with GoCarRental.com gets you the best value deals. No visit to the Netherlands is complete without a tour of Amsterdam, with its picturesque canals, world famous art galleries and museums. The centre of Amsterdam consists of 90 islands linked by canals and bridges, and is one of the most complete historic city centres in Europe. The Rijksmuseum houses many of the Dutch Old Masters from the Golden Age of Dutch painting, and the Anne Frank museum is a haunting reminder of the short but heroic life of the diarist. The Van Gogh Museum is a must on any visitor’s list.

Amsterdam, for its canals, museums and galleries

Delft, for its ceramics and historic city centre

Keukenhof in the spring – tulips, daffodils and hyacinths as far as the eye can see

Apart from Amsterdam, there are many unspoilt historic cities to visit, some of the most popular being Delft, with its canals and famous blue-and-white ceramics; the lively student city of Utrecht, with a major canal running through the centre and restaurants and bars lining the banks; and Arnhem, known as “the green city of the Rhine”, and the site of the famous WWII battle of Arnhem. Outside the cities, the Netherlands offers a host of attractions, from the spring flower fields of and castle of Keukenhof, to the village of Kinderdijk, with its rows of old windmills. The landscapes of the Waterland and Zaan regions provide the visitor with a view of the traditional Netherlands, with wooden houses, windmills, canals and dykes, and clogmakers – it’s also the region of the delicious Edammer cheese

Remember that the Netherlands is the land of the bicycle – bikes always have priority over cars on the road. There are no toll motorways in the Netherlands, and an excellent network of roads, although those in and around the major cities can become very congested at peak times. Motorists should avoid the centres of Amsterdam and other historic cities as parking is almost impossible, and the streets difficult to navigate. There are excellent park and ride systems on the outskirts of most Dutch cities. Key routes are the A16, linking Rotterdam with the Belgium border in the south; the A12, running east to west from Arnhem to Utrecht and The Hague; and the A1, linking Amsterdam with Osnabruck in Germany. The A50 from Eindhoven to Arnhem, joining the A28 at Zwolle to reach Groningen, is the major north/south arterial route.