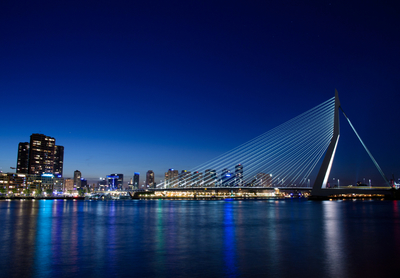 Compare & Save on car rental in Rotterdam

Rotterdam is one of the world’s busiest ports, and Europe’s largest. It was founded in 900 AD, and the name comes from the small river, the Rotte, on the banks of which the original settlement was built. A system of dykes and dams constructed to protect the settlement in the 12th century gave the town its name. The town expanded rapidly from the middle of the 19th century and as the port was dredged to create a deep-water harbour for larger ships so the prosperity of the town grew, attracting immigrants from the surrounding area and far beyond. Rotterdam was devastated by German and then Allied bombing during the Second World War, and rather than reconstruct the historic city the decision was taken after the war to rebuild an entirely modern city. Rotterdam is often known as “the city of architecture” as a result. It can be rather too open to winds from the North Sea in winter, and tourists are often advised that the city is best visited in the spring and summer months. A car is essential to take full advantage of the attractions of the surrounding region, with its historic villages and the historic towns of Delft and Dordrecht. Arrange car rental ahead of your trip through GoCarRental.com.

Things to Do in Rotterdam

Rotterdam has some outstanding museums, amongst which are the Museum Boijmans Van Beuningen, which spans the history of western art, from the Middle Ages to the current day. Artists include Bosch, Rembrandt and Breugel, with the last century being represented by Andy Warhol and Salvador Dali, amongst others. The Maritime Museum covers the history of the port and one of its most popular exhibits is a 19th century gunboat. The city has two iconic windmills which are still working – the De Ster and De Lelie windmills on the banks of the Kralingse Plas Lake. Rotterdam Zoo and Aquarium are amongst the most popular places to visit in the city, with many of the animals being housed in their natural habitats.

The Erasmus Bridge is a city landmark, towering over the port, a fascinating feat of engineering and design. Delfshaven is the oldest surviving part of the city, close to the old port, and provides a contrast to the modernist architecture of the surrounding districts. The 15th century Oude Kerk of Delfshaven is the spot from where the Pilgrim fathers set sail for America. For anyone interested in architecture and design, the Netherlands Architecture Institute houses drawings, models, and hosts regular exhibitions of iconic and futuristic designs. The Veerhaven district near the Erasmus Bridge has some historic and Art Deco buildings, and a variety of tempting restaurants and bars.

Driving in Rotterdam is much more straightforward than in many of the more historic Dutch towns, and parking is easier, if you remember that you can only pay for on-street parking with a special chip card that you can obtain from various shops and locations in the city. Some parking meters take credit cards. If you are collecting your car rental from Rotterdam The Hague Airport, it’s an easy 5 mile drive into the city centre. The city is well connected to the motorway network, with major routes being the A4 heading north, the A15 taking you east to Arnhem, and the A16 leading south to the Belgium border and the city of Antwerp.