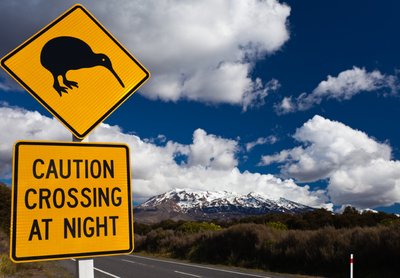 Compare & Save on car rental in New Zealand

New Zealand is in the southwestern Pacific Ocean, 900 miles east of Australia. There are two land masses which make up the country – South and North Island, with the capital, Wellington, being located at the tip of the North Island. New Zealand is still comparatively sparsely populated, with a wonderful variety of scenery and climate, ranging from the more humid climate of the South Island’s west coast to the semi-arid interior. The islands were first settled by a Polynesian population in the 14th century. Early European visitors to the islands were the Dutch explorer Abel Tasman in the 17th century, and then the British adventurer Captain Cook, who mapped the whole coastline of New Zealand in 1769. New Zealand was established as a British Colony in 1841 and in 1907 the country was declared a dominion within the British Empire, effectively giving it self-governing status. Queen Elizabeth remains the Head of State today, although the country is entirely independent. New Zealand suffered a major economic depression after losing its protected status on the UK’s joining the European Common Market and has subsequently transformed and liberalised its economy to become a successful free-trade economy. The country has become increasingly popular as a tourist destination, helped by the epic films of The Hobbit and The Lord of the Rings familiarising global audiences with its dramatic mountain and forest landscapes.

Things to Do in New Zealand

The outstanding appeal of New Zealand to visitors is the variety of its scenery and the many outdoors activities that are offered. Car rental is essential to fully enjoy the range of landscape and to explore both islands, and it is easy to book online ahead of your visit to New Zealand through GoCarRental.com. For a taste of real Lord of the Rings landscape, visit the volcanic area of Tongariro National Park in North Island, a dual World Heritage site, recognised for its Maori cultural and spiritual associations as well as its dramatic volcanic scenery.

Rotorua, about three hours’ drive from Auckland, is built over a geothermal hotspot, and Motutara or the Sulphur Bay walkway takes you past many hot springs and sulphur vents. Offering golden beaches, hiking on a coastal trail, and sea kayaking, Abel Tasman National Park is the ideal spot for outdoors enthusiasts to take in on their visit to New Zealand. To experience a totally contrasting coastal environment, Milford Sound is a deepwater fjord in Fiordland National Park, where mountains fall steeply into the sea, and if you take a boat trip out into the Sound you can watch dolphins at play, spot whales, and basking seals.

Driving in New Zealand can be a delight as long as you realise that distances between towns and tourist sites are often considerable, and plan your time accordingly. Traffic density is low, and main roads are well maintained, although in more remote areas you may well find that your car rental should be a 4X4 vehicle. Remember that traffic drives on the left in New Zealand, an extra bonus for motorists from the UK. Outside cities most major roads are one lane in each direction, so you can be held up by slow moving vehicles – on the other hand, New Zealand drivers expect you to drive up to the speed limit (but not to break it!) so can become impatient behind visitors slowing up to look at the views.