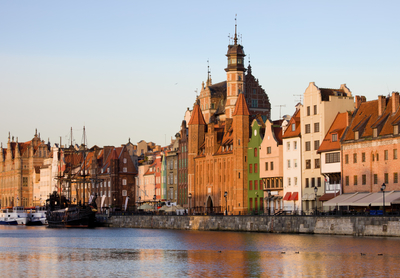 Compare & Save on car rental in Poland

Poland has had a long and eminent history, but in the last two centuries has suffered a series of invasions and landgrabs by its neighbours, culminating in the occupation by the Nazis in WWII and the establishment of a Communist regime by the liberating Russians at the end of the war. The country was first united in the 10th century, and experienced a long period of prosperity and stability under a succession of monarchs. The Polish-Lithuanian Commonwealth was not only the largest country in Europe in the 16th century, but it was also the most enlightened in continental Europe, being home to a wide variety of nationalities and religions. With increasing political unrest in the 18th century, Poland’s Russian, Austrian and Prussian neighbours took the opportunity to partition the country between them, and Poland ceased to exist as a country for 123 years. Poland regained her independence at the end of the First World War, only to suffer a second invasion at the start of WWII. After the fall of the Iron Curtain, the creation of a democratic government and membership of the European Union, Poland is now one of the greatest success stories of the old Eastern Bloc countries. The country is rapidly becoming popular with tourists for her unspoilt countryside, idyllic villages and historic cities and towns. Although Poland is in the EU it still uses the Zloty and not the Euro.

Things to Do in Poland

To see all that the country has to offer the visitor needs a car to get around, and some of the best car rental deals are available with GoCarRental.com ahead of your trip to Poland. The country’s main international airport is Warsaw, and it is worth spending a few days in the city enjoying all the attractions before heading further afield. The Old Town was entirely reconstructed after the city was decimated in the War, and Castle Square and Market Square, with their Renaissance buildings and winding cobbled streets are a visitor’s dream. The Royal Route runs from the Royal Castle in the Old Town to Warsaw’s own version of the Palace of Versailles – Wilanow – at the southern end of the route.

The city of Kraków has one of Europe’s most beautiful castles in Wawel Castle, and some fascinating examples of medieval and Renaissance architecture, as well as outstanding museums and art galleries. The city of Poznán is seen as the birthplace of the Polish nation, and the city square has some of the most striking examples of Gothic and Renaissance architecture in Europe, as well as the last working steam train line for steam buffs! Rural Poland is a delight, much of it still unspoilt, and there are over 20 national parks for the tourist to explore. Bia_owieËa National Park is a UNESCO World Heritage Site and has the last remnants of the primeval forest that once covered most of Europe. Pienií±ski National Park is renowned for its dramatic river gorges and waterfalls.

Although a lot of investment is going into improving Poland’s major routes, many Polish roads are still single lane each way, and the condition of some in more rural areas is poor. Watch out for slow-moving farm vehicles in country areas, and the many roadside stalls can often lead to motorists deciding to stop and buy at the last moment, so staying alert to potential hazards is essential! The main north to south routes from Warsaw are the S7 to Kraków, and the A1 north to Gdansk on the coast. The A2 runs east-west from Warsaw to the border with Germany and in the opposite direction to Brest in Belarus.