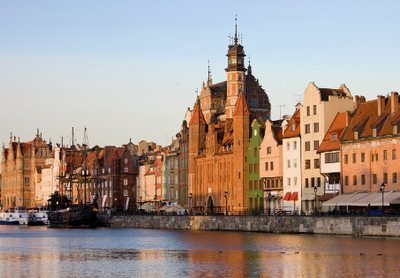 Compare & Save on car rental in Gdansk

In modern times Gdansk is famous as the birthplace of Solidarity, the democracy movement headed up by Lech Walesa which helped to bring down the Communist government. The city itself was almost entirely destroyed at the end of WWII, and almost all the historic buildings and churches have since been lovingly restored. Its position on the Baltic Sea at the mouth of the River Vistula, has always led to it being an important port and trading centre, and it’s now Poland’s principal outlet to the sea and a thriving port, as well as being a popular tourist destination. Over the centuries the city has changed hands and been claimed by both the Germans – the Teuton Knights – and the Poles, and after the First World War it became the Free City of Danzig under the auspices of the League of Nations. Hitler used the issue of the city of Danzig, which Germany claimed, as the excuse for invading Poland and starting WWII. Both Ryanair and Wizz Air fly into Gdansk Lech Walesa Airport from the UK. The region is a fascinating one to explore for its landscapes and history, so plan car rental ahead of your visit

Things to Do in Gdansk

The city has numerous picturesque streets and cobbled alleyways to explore, and the Royal Way is a good starting point. The street where royal processions paraded when the Polish Kings visited the city houses some of the most striking Renaissance and Baroque colour-washed buildings, and close by is the Upland Gate at the western end of the Royal Way, and the Foregate, which used to house the Torture House, prison, and courtroom. Happily the building is now a museum displaying an amazing collection of “Baltic Gold” – amber. Further east is the 17th century Golden gate, with its impressive colonnade and statues.

The 14th century St Mary’s Church is supposedly the oldest brick church still standing in Europe, and it dominates the centre of the Main Town. The enormous church can apparently hold a congregation of 25,000. The interior boasts many fine works of art and an astronomical clock, and views from the high tower over the city are unparalleled. Housed in an underground bunker, the European Solidarity Roads to Freedom Exhibition tells the story of Poland’s liberation from its Communist government. The Maritime Museum is a distinctive old redbrick tower alongside the river, and has a number of fascinating displays, including Poland’s maritime history, and underwater archaeology. In the centre of Gdansk is the old Renaissance Town Hall, with its beautiful ceiling and exhibitions on the history of the city.

Explore the centre of the city on foot, but take advantage of the Gdansk’s situation on the Baltic and proximity to some fabulous scenery and attractive beaches to arrange car rental for your Gdansk visit through GoCarRental.com and tour the coastal region. Parking in the centre of the city is haphazard, with many motorists ignoring parking regulations – not advised as a visitor. If you pick up your car rental from the airport, it’s a short 12 mile drive into the centre of the city, taking the ramp from the airport road on to the E28, and then the DW501 into Gdansk. The E28 is the main route to take to visit Gdynia, the largest port in the area, and the beaches and pine forests of the coast.