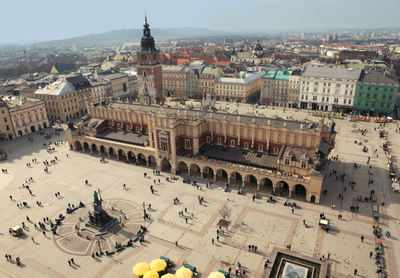 Compare & Save on car rental in Krakow

Kraków is one of the oldest cities in Poland, and deeply important to the Poles, having been the capital of the country in medieval times, and the seat of Polish royalty. Legend has it that the name comes from King Krak, who built his city over the cave of a dragon that he had slain. In 1038 Kazimierz the Restorer made Kraków the capital of Poland and subsequent Polish kings built the walls, fortifications and castle that remain outstanding attractions for the visitor today. In later centuries Kraków shared the troubled history of the country, with successive waves of occupiers, culminating in the Nazi puppet regime of the 1940s and the subsequent Communist rule. With the fall of the Iron Curtain in 1989 the city has undergone extensive renovation of its historic buildings and churches and was designated a World Heritage site by UNESCO

Things to Do in Krakow

Kraków is a great jumping-off point for touring southern Poland, Slovakia and the Czech Republic. Arranging car rental for your visit to Kraków couldn’t be easier through GoCarRental.com, who will locate the best deals and the most suitable vehicles. The starting place for any visitor to the city itself is the huge Market Square with its 16th century Cloth Hall, and the impressive Gothic Church of the Virgin Mary. A trumpet signal is played from one of its two towers every hour.

Market Square and the Cloth Hall

The old merchant city repays exploration, with the Ulica Kanonicza, the oldest street in the city, lined with Renaissance houses. Ulica Florianska runs from Market Square to the Florian Gate, with its four towers and remains of the city’s medieval fortifications. The street has some wonderful Renaissance architecture as well as designer shops and excellent bars and restaurants. Wawel Cathedral is a magnificent church, with a gilded cupola and one of the world’s largest bells and is the burial place of many of the Polish kings. A very different sort of monument is Oscar Schindlers Factory, which now houses a museum and tells the story of the rescue of many of Kraków’s Jews which inspired Spielberg’s film “Schindlers List”. For aviation enthusiasts the Polish Aviation Museum is unmissable, with fascinating exhibitions on Poland’s contribution to the Battle of Britain, and the Cold War.

Motorists are advised to stay away from the city centre, which gets crowded with traffic and tourists in horse-drawn carriages. The rules on driving and parking zones are confusing even for local residents. There is a partial ring-road system which makes it easy to navigate around the outskirts of the city once you’ve got your bearings, and the new A4 motorway now brings the Czech republic within a day’s outing. The E77/S49 leads to the border with Slovakia and the relatively unknown but spectacular scenery of the Javorová dolina nature reserve. There is a toll between Kraków and Katowice, but most other main roads and expressways are toll free. The speed limit on motorways is 140kph. Visiting drivers should keep a wary lookout for hazards on country roads, as locals often treat them as farm tracks, and you may come across herds of cows or horse-drawn cars and slow moving tractors.