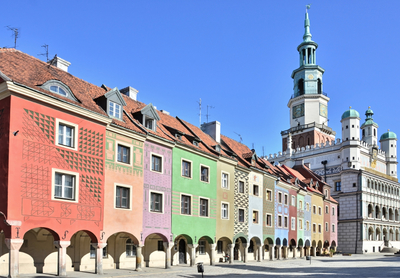 Compare & Save on car rental in Poznan

Poznan is one of Polands’s most important cities – it was Poland’s first capital and is regarded by many Poles as the birthplace of their nation. Its location in western central Poland on the River Warta made it a significant trading centre from early times, and an important cultural centre for the tribes in the area prior to Poland’s Christianisation. In the 14th century Duke Przemysl built the royal Palace and founded the “new” town of Poznan, inviting large numbers of German settlers to help with the construction. Battered by endless small wars, Poznan came under Prussian rule at the end of the 18th century, and with only a small break during the Napoleonic Wars, remained a province of Greater Prussia, being heavily fortified by the Germans during the latter part of the 19th century. At the end of the First World War Poznan reverted to Polish rule, once again being occupied by the Germans during WWII. The city was liberated by the Red Army in 1945, but the battle of Poznan left much of the town in ruins. As with many other Polish cities, there was much reconstruction of the historic centre of the town during the 1950s and 60s, as well as new building for the expanding population.

Things to Do in Poznan

Tumski Island (Tumski Ostrow) is a peaceful little island between the rivers Warta and Cybina, with the historic cathedral and the burial place of some eight Polish kings and dukes. St Peter and St Paul’s Cathedral has side chapels that were untouched by the bombing of WWII, and the brick edifice itself is impressive. Stary Rynek is the old town square, and was entirely rebuilt after the destruction of the war.

One of the finest medieval squares in Europe, the Town Hall is the centrepiece. It’s a small Renaissance building, with a museum in its interior, and the famous “Butting Clock” on its tower- two mechanical goats butt their heads together when the clock strikes noon. The museum provides an account of the history of the city down the ages. The Baroque and Classicist Palace of Rogalin set in a beautiful park is a popular tourist attraction in the summer, and if you have a hire car is within easy driving distance. The National Museum in Poznan has collections ranging from the work of Polish painters to Greek and Roman statues and sculpture.

Poznan is on an excellent network of major roads, with the European long-distance route from Berlin to Warsaw, the E30, running just south of the city. Visitors should probably avoid driving into the centre of the city, as the narrow streets get busy and parking can be difficult to find. Market Square is closed to traffic and the one-way system means that you have to drive in a large semi-circle to get to the other side of the city. There are a number of reasonably priced guarded parking garages where you can leave your car overnight, and during the day on-street parking spaces are metered and payable with a chip card obtained locally or by coin. If you have booked car rental for your visit to Poznan through GoCarRental.com you can choose to collect your vehicle either from the airport (5 miles from the city centre) or from a point in the city. Taking Poznan as your starting point, head north on the DK11 to explore the towns of Pila and Walcz, and the dense forests of the area.