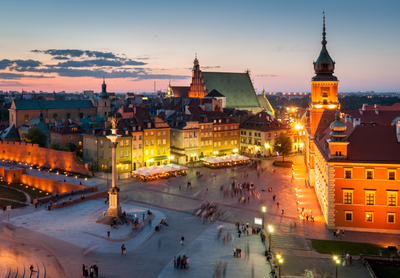 Compare & Save on car rental in Warsaw

Warsaw (Warszawa in Polish) is the capital city of Poland, located almost in the centre of the country on the river Vistula. Sometimes known as the “Phoenix City” for its ability to rise from the ashes of so many disasters over the centuries, Warsaw became the capital of the country in 1596 when King Sigismund moved his residence to the city from Kraków. Occupied by the Germans during the Second World War the city was famous for the resistance that it put up, the uand the terrible destruction that followed. Almost 85% of the city’s buildings were destroyed at the end of the war, and in the decades that followed many historic houses were painstakingly restored. With the fall of the Iron Curtain, the election of a democratic government, and membership of the European Union, Poland and its cities have enjoyed a steady rise in prosperity, and Warsaw has become a popular tourist destination. Although most of the city’s attractions lie in the centre, a car is essential to explore the surrounds, and the central location of the city makes it an excellent base from which to tour the country. Planning car rental for at least part of your visit to Warsaw is easily arranged through GoCarRental.com, with pick-up points at the airport or in the city.

Things to Do in Warsaw

A good starting point for your visit is the Old Town, where the cobbled streets and Gothic and renaissance houses, fine palaces and beautiful churches have all been perfectly restored. The Old Town Square is surrounded by 17th century merchants’ houses, and at one end of the square is a giant image showing the extent of the destruction at the end of the war. Castle Square, between the Old Town and the river, was built in 1821, and is surrounded by impressive buildings. The 17th century Royal Castle, entirely rebuilt from the original bricks after being dynamited at the end of the war, served as the central building of the Polish Commonwealth for several centuries.

The beautiful Baroque Wilanow Palace, or “Polish Versailles”, is set in its own extensive gardens, and hosts many concerts and musical events. No visit to Warsaw is complete without a visit to the Warsaw Uprising Museum and to the Jewish Ghetto Memorial, both testaments to the courage and suffering of the city’s people. Warsaw has many historic churches, and one that should be on any visitor’s list is St Annes Church, which contains the heart of Chopin. Climbing to the top of the church tower provides fantastic views over the Old Town and the city.

As with any city, Warsaw roads become jammed at peak times, especially in the business and commercial sectors of the city. The motorist also has to watch out for some poorly maintained roads and resultant potholes. Polish drivers can be fast and impatient, and the advice is to stick to the speed limit and don’t be put off by some adventurous overtaking manoeuvres. Arrange car rental with satnav and getting around the city is easy; street parking is paid at the nearest meter. From the airport to the Old Town in the centre of the city is a 10 mile drive on route 634, which brings you down to the river. There is an approximate ring road system, although it doesn’t entirely encircle the city, with the major long-distance European route, the E30 passing just north of Warsaw, and the S2 and S8 highways providing the western section of the circle.