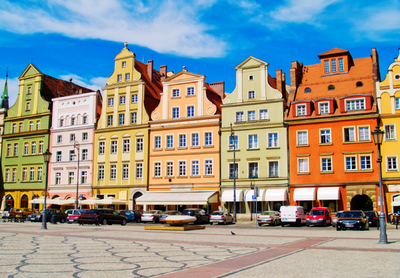 Compare & Save on car rental in Wroclaw

Wroclaw, like many Polish cities, has had a turbulent history. One time capital of the Prussian province of Lower Silesia, it was once known by its German name, Breslau. It has been, over the course of history, claimed by the Austrians, Bohemians, Prussia, and the Kingdom of Poland. The ancient city was destroyed by the Mongol invasion of 1241, and on its rebuilding was largely repopulated by German settlers, although the city has always had a strong multi-cultural element. With the border changes at the end of WWII it once again became part of Poland, and the restoration work began to reclaim the historic city that was entirely destroyed in the fighting between German and Russian troops towards the end of the war. It is often described as “Poland’s undiscovered gem”, with picturesque streets, and numerous bridges over the river Odra. Its situation at the heart of Lower Silesia makes it a popular centre and touring base, and visitors can ensure that they have the freedom to explore by booking car rental in Wroclaw through GoCarRental.com

Things to Do in Wroclaw

The oldest and most picturesque part of the city is Ostrów Tumski, which used to be an island, and contains the Cathedral and Main Market Square and Old Town Hall. The 13th century cathedral of St John the Baptist is impressive for its Gothic brick architecture and its high towers and steeples. The medieval Market Square with the magnificent 14th century Town Hall is at the heart of the pedestrian area in Wroclaw, and well worth visiting at night, when the historic buildings are floodlit. A farourite game for visitors to Wroclaw is to see how many of the 250 bronze dwarves scattered about the city they can spot.

Riverboat trip down the Odra River

The Tumski Bridge that leads on to Tumski Island is a “must see”, decorated with the padlocks that lovers put there to pledge their undying love to one another. A short drive from the city centre brings you to the Multimedia Fountain at Pergola, which combines spectacular music, water and light displays, especially impressive at night. Unusually, Wroclaw is also famous for its 19th century train station, recently renovated, and a draw for visitors. Of the many bridges that cross the river, one of the most impressive is the modern Most Milenijny, illuminated at night. Just outside the city Project Riese gives a glimpse into the system of underground bunkers constructed by the Germans during WWII in the Owl Mountains.

The historic centre of the city is pedestrianized , but there are excellent roads connecting the centre to the suburbs and beyond. Check on road closures, however, as there is an extensive improvement plan being carried out over the next few years, leading to many diversions and road closures. Street parking is permitted, but the advice is to park in a guarded garage overnight to avoid risk of damage to your car rental. The airport is a short distance to the city, 9 miles, but a satnav is probably essential for the visitor, as the route is a slightly winding one. Wroclaw has an inner and outer semi-circular ring road, the A8 forming the outer route, linking into the network of long-distance European routes running east to Lodz and west to Dresden.