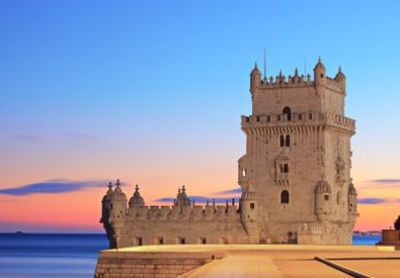 Compare & Save on car rental in Lisbon

The capital city of Portugal, Lisbon shares with Rome the distinction of being built upon seven hills. It’s also unusual in being a capital city that has been constructed on the northern banks of the River Tagus to face the sea, which gives the city its glorious light and the feel of always being close to the ocean. It is one of the oldest cities in Europe, pre-dating London and Paris, and Rome, and has over the centuries been settled by the Phoenicians, the Romans, and the Moors, from whom the city was finally captured by a Crusader army in 1147. Lisbon has always been a major trading centre, with its location on the estuary of the River Tagus offering an ideal base for journeying to the Mediterranean, Atlantic and North Sea. Many explorers have set sail from the port, including Vasco da Gama. The city suffered a catastrophic earthquake and tsunami in 1755, which destroyed 85% of its buildings and killed 40,000 residents. The city centre was rebuilt along the latest designs in urban planning, with wide squares and boulevards, which can still be enjoyed today. The city has experienced a resurgence of prosperity in recent years, and has become a popular tourist centre, with the winding alleyways of its old districts, and its thriving music and art scenes. Lisbon now has one of the busiest container ports in Europe.

Things to Do in Lisbon

Lisbon is a city to stroll around and explore, enjoying its cuisine, music, and numerous fine buildings and museums. Look out for glimpses of the glorious blue-and-white Moorish tiles that many of the older houses have in their courtyards or decorating their walls. The Alfama district is one of the areas of the city that survived the earthquake, and its steep narrow backstreets winding up the hill to Sao Jorges Castle, lined with music bars and aging houses, make for a wonderful day’s exploration. The Gulbenkian Museum has to be on every visitor’s list, both for the exterior design of the building, and for its collection of art works and ceramics, including rare Chinese porcelain and Islamic art and tiles.

Sao Roque Church is a feast of colour and treasures, built by the Jesuits in the 16th century, and one of its chapels is known as “the most expensive in the world”, with its extravagant use of alabaster, amethyst, mosaics, ivory and marble. The Torre de Belem and nearby Monastery are built on a long promontory, and if you climb the Tower you can imagine yourself floating on the waters of the River Tagus. There are endless attractions to explore outside the city, not least the great stretches of golden sand along the Atlantic coast, and you will appreciate having located a good car rental deal through GoCarRental.com ahead of your trip. Top Three Attractions Gulbenkian Museum Alfama district, Sao Jorges Castle Torre de Belem

If you have arranged car rental in Lisbon, either with collection from the airport or from a rental company in the city itself, make sure that you have ordered a satnav with your rental car, as driving around the city can be confusing until you get used to it, and you also need to acclimatise to Portuguese driving! When you are taking day trips out of the city, try to avoid rush hour, as the main access roads to the city can get very jammed, especially the A2 and the A6, and there are just two main bridges spanning the Tagus. Some roads and bridges are tolled, so be prepared with change.