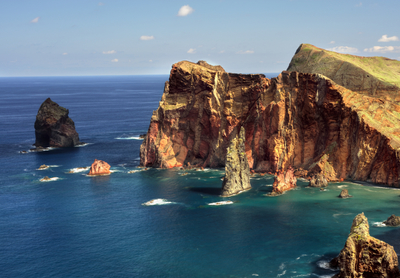 Compare & Save on car rental in Madeira

Madeira is an autonomous region of Portugal, and is known as the Pearl of the Atlantic, with its sub-tropical vegetation and temperate year-round climate. It’s located over 300 miles from the European coast, and the main airport (Madeira or Funchal Airport) was updated in 2000 to provide a longer runway and the capacity to receive up to 3 million visitors a year. The capital of the island is Funchal, sited in a natural amphitheatre, with the Atlantic on one side and the mountains at its back. The island was first discovered by Portuguese sailors in the 15th century, and the Portuguese soon established sugar cane plantations on the island, then a great luxury in Europe, so trade flourished. The vineyards planted on the island also produced the famous Madeira wine, especially popular in 18th century England. The island has also suffered piracy, a brief occupation by the English during the Napoleonic Wars, and bombardment by German U-boats during the First World War. Today it is a popular and thriving tourist spot, offering all the attractions of a lively resort in Funchal and the draw of hiking in the interior to keen walkers.

Things to Do in Madeira

Booking the best car rental deals in Madeira through GoCarRental.com will give you the freedom to explore the whole island. To gain wonderful views over Funchal and the island, take the cable car in Funchal up to Monte, where the reward is not only the panorama, but a picturesque church and Monte Palace with its tropical gardens. The lava pools at Porto Moniz are not to be missed, a reminder of the volcanic origins of the island, and a lovely way to relax and sunbathe while enjoying the warm waters and the colours of the surrounding sea. The “laurisilva” or laurel forests in the mountains are special not only for their rarity but also for the peace of the surroundings and the glimpsed views of the island below on a fine day.

Cabo Girao, one of the world’s highest ocean cliffs

The “levadas” are well-known by hikers in Madeira, and are aqueducts built to bring water from the north to the south of the island, constructed between the 15th and 20th centuries; apart from carrying water they also provide a network of walks throughout the island. A tour of the Sao Vicente Caves and Volcanism Centre provides a fascinating view of the volcanic origins and formation of the island. For a wonderfully unspoilt church tucked away in Funchal, Igreja de Sao Pedro offers the visitor a wonderful interior with ornate wall paintings, crystal chandeliers and gilded woodwork, belied by its rather plain exterior. Top Three Attractions Monte Palace and tropical Gardens Sao Vicente caves Cabo Girao, one of the world’s highest ocean cliffs

Navigating around the island couldn’t be simpler, once you realise that there is a road that encircles the coast, which is the VR 1 from Funchal airport and becomes the VR3 as it wends its way towards Porto Moniz, and VR2 between Porto Moniz and Santana. The VR4 bisects the island. The main challenge for the motorist is not getting distracted by the wonderful sea and mountain views, as the winding and narrow stretches of the road in some places, especially driving up into the mountains, can take all your concentration. There are numerous “miradouros” – viewpoints – where you can pull over and savour the views. Car rental will enable the visitor to explore the island and discover some of the lovely villages and scenic spots inland which are almost literally off the beaten track.