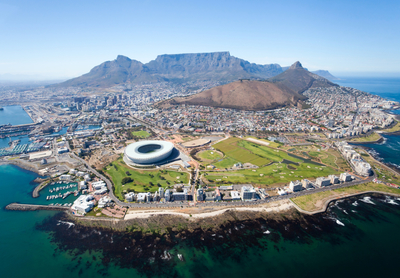 Compare & Save on car rental in Cape Town

Cape Town is a city that has it all. Proudly multicultural, there are natural wonders like no other, bountiful wildlife, the most delicious wines in the country, if not the world, as well as being voted World Design Capital 2014. Home to the famous Table Mountain, there’s plenty more to discover within the city itself. Gardens and Parks mean this is one of the greenest cities in the country, and its situation on the southern coast of South Africa means it’s a haven for those who love the sea – whether it be to sunbathe by or surf on.

Things to Do in Cape Town

A vacation in Cape Town can be as active or as relaxing as you like. Either way, one absolute must-see is Table Mountain National Park. This flat topped mountain is without a doubt the jewel in Cape Town’s crown, but other equally beautiful landscapes await you at the historic Kirstenbosch Botanical Gardens and Company’s Gardens too. You can paraglide from Lion’s Head, surf by the Sea Promenade, take a whale watching trip and swim with sharks if you’re brave enough. If you’d rather stay on dry land there’s mountain biking and hiking galore, and in the city itself an essential stop-off is the uniquely colourful Bo-Kaap neighbourhood and museum.

Whale Spotting off the Coast

Cape Town is without doubt one of the easiest cities to drive around in South Africa. Courteous drivers and great road conditions really make it a breeze. Be aware that driving is done on the left in South Africa, and that crime does occur – so don’t stop to pick up strangers, and try to have windows closed at traffic lights, especially at night. Car rental in Cape Town, and the country generally, is far cheaper than you’ll find in Europe, and petrol prices are low too, which is great for travellers on a budget. For those keen to take their explorations beyond Cape Town, several major highways serve the city: The N1 through Johannesburg to Harare in Zimbabwe, the N2 along the East Coast towards the Garden Route and Swaziland, and the N7 north along the West Coast to the Northern Cape city of Springbok and to Namibia.