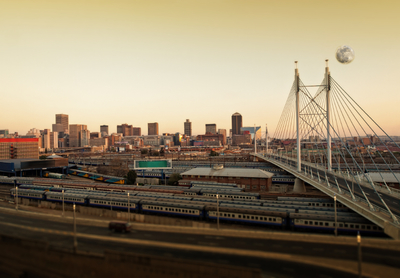 Compare & Save on car rental in Johannesburg

A city of dramatic contrasts, much like South Africa itself, Johannesburg has witnessed some of the country’s greatest triumphs, as well as its most dramatic failures. Truly the beating heart of the nation, Jo’burg undoubtedly still bears the scars of the country’s turbulent history and a stark contrast between rich and poor is still in evidence here. But it’s also unquestionably a city that’s progressing strongly - vibrant, multicultural, and brimming with hopeful self-confidence after the huge success of the 2010 World Cup. There’s much to explore in this vast, modern metropolis and beyond.

Things to Do in Johannesburg

The city is a big one, and you’ll find it divided into many suburbs and districts. Newtown and the Market Theatre area is Jo’burg’s cultural precinct, with plenty of live music venues to check out. Braamfontein is buzzing and trendy thanks to its location by the universities, and on the east side of the city you’ll find Main Street Life, the Maboneng Precinct and Arts on Main - especially good is the Sunday market and The Bioscope independent cinema.

For shopping, nothing beats Sandton, home to the richest people in the country and some incredible shopping malls. To learn more about the history of this fascinatingly mixed-up city, also highly recommended is the UNESCO World Heritage Site, the Cradle of Humankind - one of the planet’s most notable hominid fossil sites, the incredibly moving Apartheid Museum, and a tour of the (safe parts of) the Soweto Township that Nelson Mandela called home.

Driving in Johannesburg is cheap thanks to low car rental rates and low petrol prices too. Driving is done on the left and, as in all major cities, can be a little hectic in the city centre. Try to avoid rush hour when you can. Sadly, crime is still a problem, so it pays to be cautious, especially in rundown areas of the city – keep your windows closed and doors locked. Outwith the city, the vast, wide roads are in excellent condition and can get you to many areas of interest like neighbouring Pretoria, Gabarone the Botswana capital, as well as the breathtaking 350km drive from Jo-burg to the unforgettable wildlife and scenery of Kruger National Park.