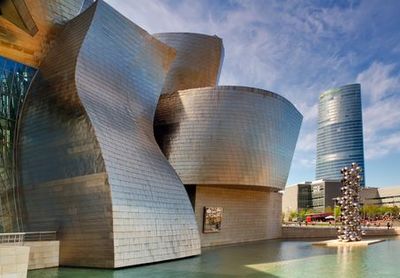 Bilbao is the capital of the province of Biscay, a thriving city of over a million people, eight miles from the Bay of Biscay. It is famous for the great modernising and cultural projects which have been the driving force of the regeneration of the city, and make it one of the major tourist attractions of Spain. Amongst them are the Guggenheim Museum, the Euskalduna Conference and Music Centre, and the British architect Norman Foster\'s metro system. The transport links are excellent and make it an ideal base from which to explore further afield. Arranging a car rental will give the visitor the chance to make day trips to the other capitals of the Basque Country - Vitoria and San Sebastián.

Things to Do in Bilbao

The great attraction of the city are its cultural activities and the dramatic modern architecture of many of its museums and galleries. The Guggenheim Museum has one of the largest private modern art collections in the world, as well as being notable for its spectacular exterior design. The city offers a feast of other museums, including one devoted to bullfighting, and another to maritime life.

The Fine Arts Museum with its outstanding collection of Old Masters

August sees the annual fiesta take over the city, with nine days of dancing and music. As well as taking the Artxanda Funicula to gain dramatic views over the city, the visitor can wander through the many parks and gardens that grace the city, amongst the finest being the Doña Casilda Iturrizar Park next to the Fine Arts Museum. Further afield, there are attractive towns and villages to explore, including Portulagete , a medieval fishing village on the banks of the Nervion River.

The most convenient place from which to arrange car rental is Bilbao Airport, which is just a short and direct drive from the city itself. Driving in Bilbao centre can be complicated with its many one-way streets and narrow lanes, but the road network around the city is excellent. The A-8 motorway links Bilbao to Santander in the west and San Sebastian in the east, and there is a bypass around the city with four access routes into the city. The one that visitors need to know is the Bilbao Oeste exit, which takes you to Plaza Moyau in the city centre, the major museums and the old town. A car excursion on the B-634 along the banks of the river out of Bilbao will bring you to the coast and to many little bays and villages that are well worth exploring.