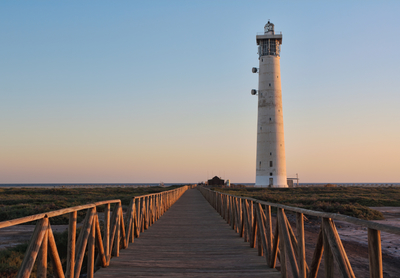 The second largest Canary Island, Fuerteventura may be less-frequented than its more famous neighbours Tenerife and Lanzarote, but it is steadily growing in popularity, thanks largely to some areas of outstanding natural beauty (the island was declared a biosphere reserve by UNESCO in 2009). It is also the oldest of the three, spewing forth from the depths of the Atlantic some 20 million years ago. Fuerteventura grew to a critical mass 15 million years later, before being eroded by the elements to form its current shape. The last volcanic activity in Fuerteventura was 4000 to 5000 years ago. The island’s highest point is the 807m above sea level Mount Jandia. The least-settled of the Canaries, it is divided into six municipalities (Antigua, Betancuria, La Oliva, Pájara, Puerto Del Rosario, and Tuineje), with 100 settlements scattered throughout. It’s elongated shape means the island boasts the longest beaches on the whole Canarian archipelago – and with no fewer than 152 beaches along the coastline, exploring the coast is one of the principal attractions of any Fuertaventura vacation.

Things to do in Fuerteventura

There are a number of places of interest on the island. Beach-wise, Corralejo and El Jable to the north are real highlights, with fine sandy dunes and almost permanently breezy conditions making for a windsurfers paradise. Surfing, too, is common on these coasts, which are battered with some pretty spectacular waves throughout the year. El Cotillo is a tiny fishing village in the north-west of the island, renowned for the serenity of its beaches. Cofete to the west of Jandia is well worth a visit. Here, visitors will find a remote, indomitable house known as Villa Winter, reputedly built on land owned by Generalissimo Franco.

There are very few tourist facilities per se, but Canarians consider this all part of the charm. If it\'s boat trips through coves and quiet strolls along the beach you fancy, don\'t visit the Canary Islands without spending at least a day on Fuerteventura.

With little in the way of public transport – other than the many boat rentals on offer – car rental in Fuerteventura is the best way to take in the island in its entirety. It\'s not small: 98km long and 30km across at the widest point. And though there\'s not a great deal to see in the way of tourist attractions, driving around the deserted highways is its own treat. GoCarRental.com is one of the many car rental outlets servicing the island. Visit their site for more on \'car rental Fuerteventura\', and be sure to factor this simple, charming island if you find yourself in the Canary Islands.