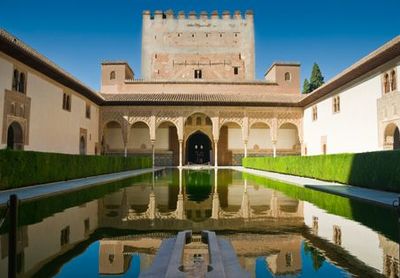 One of Andalusia\'s finest cities, Granada is rich in history and culture, with the idiosyncratic blend of Moorish and Spanish influences found all over the region. It\'s as old as anywhere else in Andalusia, with settlement dating back at least 2500 years, first as an Ibero-Celtic colony and then a Roman State. Roman rule allowed Granada to flourish, with the construction of aqueducts, roads, and the rest of the infrastructure found in the ruins of any major Roman municipality. A strategic military post on the Iberian peninsula, the city was a natural target for invaders, and the Romans were followed by the Visigoths, then the Byzantine Empire, which eventually fell to Muslim invaders in 711. Grenada remained under the dominion of the Ziri Dynasty until finally being absorbed into the Spanish Empire in the 15th Century.

Things to do in Granada

In addition to countless places of historical interest, Granada is renowned as a student city, and boasts all the attendant nightlife you\'d expect. It\'s also close enough to the Sierra Nevada that hopping up to the mountains for a day\'s skiing is quite feasible, although a car is absolutely essential, as public transport is infamously poor (see below for car rental Granada). Here, tapas are still served as they were intended – one free of charge for every drink you buy. You never know what you\'re going to get, so bar-hopping through the town is pot-luck pleasure.

Moorish fortress The Alhambra was supposedly on the shortlist for the New Seven Wonders of the World. Little wonder – stunning architecture and grounds make it an essential stop for any visitor to Granada. Be prepared for a long queue, but trust us when we say it\'s worth it, and you can combine it with a visit to the nearby Arabic baths. If you plan to spend your entire vacation in Granada, be sure to rent a car and drive to nearby Seville – great for a daytrip, even greater for a night\'s stay in another fine Spanish city.

The city itself is not ideal for driving around, consisting of a morass of narrow, one-way streets thronging with taxis, scooters and wide-eyed tourists who have little compunction about drifting into the road as they take in the gorgeous architecture. Outside the historic centre things get a lot more driver-friendly, and a car rental is essential for getting to Seville or the Sierra Nevada. GoCarRental.com offers a wide selection of vehicles, see their site for car rental in Granada.