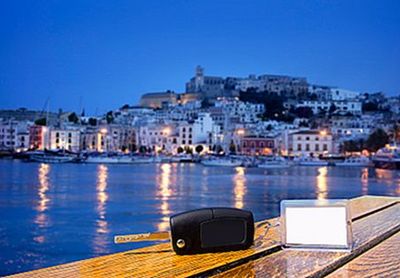 Lying 90km off Spain\'s east coast, Ibiza is part of the Balearic Islands, a culturally and topographically unique part of the Mediterranean Sea. Quickly – and cheaply – reached from all the major European Capitals, it is a popular destination for clubbers, families, retirees, couples and explorers alike. Ibiza has been inhabited for at least 3000 years, with archaeological digs unearthing bronze-age settlements all over the island. Ibiza Town was established by the Carthaginians in around 654BC, and has been thriving ever since. With a warm climate all year round, Ibiza is lush with Pine forests and almond, fig and olive trees; a verdant paradise neatly complimented by a world-renowned club scene.

Things to do in Ibiza

Ibiza is packed with adventure opportunities. Take a boat to Formentera, a tiny island two miles off the south coast. Here, a bike or scooter will suffice, but on Ibiza itself, car rental is recommended if you want to get the most out of the island. Driving and cycling routes are available from Ibiza\'s tourism department – the San Antonio to San Rafael route is well-trodden and equally well-recommended.

The Port of Ibiza

For kids, the Aguamar waterpark in Playa d\'en Bossa offers a range of thrill slides, as well as pools and playgrounds. Ibiza has 80 beaches, with Cala Jondal in San Jose widely regarded as one of the best, especially for sunseekers looking for serenity and sophistication. Nudist beaches are not uncommon, the aforementioned Formentera a notable example. The nightlife is unrivalled in the Med, with internationally-recognized superclubs including Amnesia, Space and Privilege providing day-glo action all day and night throughout the summer.

Ibiza is a fantastic place to see from the road, so car rental is key, even if only for a few days of the trip. The island is only 45km long and 25km wide, so it\'s not inconceivable that you could see every inch of its highways and byways during a fortnight\'s vacation. Touring the historic villages is a gratifying way to spend a day or three, and the views from the Torre de Comte, a defence tower that used to control the San Antonio Bay, are nothing short of spectacular. Whatever kind of rental vehicle you\'re after, it\'ll surely be available for hire in Ibiza. So go on, enter your dates into our search form and see the comprehensive choice of vehicles we have on offer on the island of Ibiza.