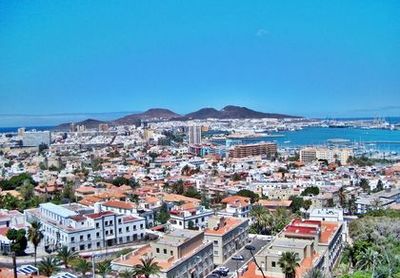 Las Palmas de Gran Canarias is one of the largest cities in Spain, and the largest in the Canary Isles. It’s served by Gran Canaria airport, and offers the visitor all the attractions of a thriving city, with excellent shopping and eating out, together with one of the most famous beaches in the Canaries. La Playa de Las Canteras is over 4km long, and is often described as the symbol of the city and its citizens. Las Palmas has a thriving port and plans are afoot for its expansion. The historic Catedral de Santa Ana is a landmark visible from most parts of the city, and the old town which surrounds the cathedral, La Vegueta, entrances visitors with its colourwashed mansions, and narrow streets and alleyways.

Things to Do in Las Palmas

Although tourists are advised to avoid driving in the city, as even natives find the complex street plan challenging, arranging car rental on arrival at Las Palmas will open up the opportunity to explore the whole island of Gran Canaria. In Las Palmas itself, a few days spent on the beach sunbathing, swimming and windsurfing, is obligatory. La Vegueta provides not only a chance to stroll round the cool streets of the old city admiring the stonework and carved wooden doors of the mansions, but also offers a covered market, and excellent eateries to choose from.

The Renaissance Casa de Colon was the Governor’s House of the island, and a stopping off point for Christopher Columbus on the start of his voyage to discover America. The Canarian Museum provides exhibitions on the history of the islands, and a rather spooky collection of skeletons and mummies. Outside the city, a tour of the island will bring you to Gáldar, the ancient capital of Gran Canaria, and La Cueva Pintada, (painted cave), relics of the original population of the island.

The first motorways in the Canaries were opened around Las Palmas, linking the city to the airport and to the south coast. Car rental in Las Palmas can be organised at Gran Canaria Airport, and the GC-1 takes you direct from the airport to the city, a 12 mile drive. Dual carriageways and motorways run around Las Palmas and make the rest of the island easy to access for the visitor. The GC-2 runs from Las Palmas to Gáldar, and for the brave motorist there is a spectacular onwards drive on the smaller and twisting coastal route to Agaete and beyond, winding along the cliff faces of the rugged west coast. The GC-15 from Las Palmas winds through pine woods and the volcanic highlands, and takes in the Pico de las Nieves and the Cueva Pintada and the picturesque village of Tejeda.