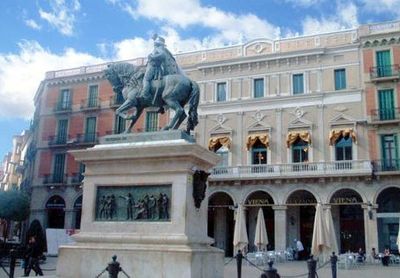 Famed as the birthplace of legendary surrealist architect Antoni Gaudi, and for its world-renowned wineries, Reus is the capital of the comarca of Baix Camp in Catalonia. The settlement had its first major growth spurt after the construction of the church in the mid-12th Century (at which point it was known as Redis). After a series of wars and occupations, Reus eventually became the second city of Catalonia during the 18th Century, at which point the town walls were demolished, leading to a growth in commerce, primarily textiles and liquor. The latter commodity was so heavily associated with the city that people across Europe commonly referred to \'Reus, Paris and London\' as the homes of spirit production. These days, it is known mainly for a thriving tourist centre, attracting people from Russia, France and Holland to the Costa Daurada region. Now a major route for Ryanair, an increasing number of tourists come from Ireland and the UK, though few would deny that their final destination is the Catalan king of cities, Barcelona. It\'s a shame, because Reus is a beautiful city in its own right, with a rich history and no shortage of excellent beaches.

Things to do in Reus

The work of Reus\' most famous son, Antoni Gaudi, is all over Barcelona, but sadly few examples of his work can be found in his hometown. By way of consolation, the less-celebrated Lluis Domenech i Montaner has left his mark all over the city. Though not as eye-popping as his contemporary Gaudi, Montaner\'s work takes a similarly modernist approach. Several of his buildings remain, and even if you are stopping in Reus en route to Barcelona, it would be a great shame to miss them.

Hire a car when you land and spend your first day here. Arrive in June and you might want to spend a couple more days, as the city comes alive with fiestas and live music in the streets and squares every night. In typical Catalan style, there is no shortage of excellent tapas bars.

Reus is in an easily accessible location thanks to the airport of the same name, and motorways fan out across Spain, with Madrid only six hours drive away. If you\'re looking for car rental, Reus, with it\'s location near the airport, is well served. Hire a car on arrival and drive the 10 km to the beaches of the Costa Dorada and, of course, the 100km to the magnificent city of Barcelona, where Gaudi headed to seek fortune and glory. GoCarRental.com offers a wide selection of car rental options - visit their site for more on car rental in Reus.