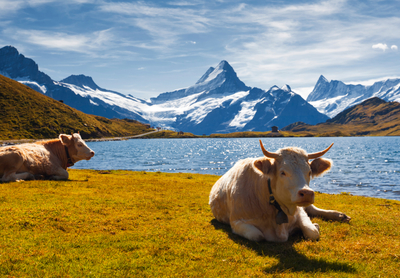 Compare & Save on car rental in Switzerland

Switzerland is traditionally known as the land of mountains, lakes and cuckoo clocks. In fact, its many centuries of neutrality have created one of the most prosperous and stable countries in the world. It is the birthplace of the Red Cross and home to many international organisations, as well as having two of the most important economic centres in Europe, in Zurich and Geneva. The country is well-known for its federal structure, being divided into 26 cantons, with the city of Bern as the central seat of government. The creation of the Swiss Federation dates back to 1291, and apart from a brief occupation by the French during the Napoleonic era, it is has successfully deterred invaders and avoided being embroiled in European wars. The languages spoken in Switzerland reflect the countries surrounding it – France, Germany, and Italy, with the major languages in the country being French and German. In spite of its landlocked situation in the heart of Europe, the country is not a member of the European Union. Tourism provides a major source of income in many areas of Switzerland. The spectacular landscapes of the Swiss Alps had started to attract tourists in the 19th century, and with the growth in popularity of skiing in the 20th century, the country became an important centre for winter sports and tourists flocked to ski centres in the Alps. Major cities are Zurich, Geneva, Basel, Lausanne and Bern.

Things to Do in Switzerland

Although associated mainly in the past with winter sports, Switzerland offers one of the most varied experiences to the visitor touring the country, and increasing numbers of tourists are choosing to visit the hiking trails in the high Alps in summer. As well as the attractions of a varied and spectacular landscape cities such as Geneva and Zurich provide an experience of sophistication, some of Europe’s top museums and galleries, and luxury shopping. For many tourists Geneva is a good starting point for exploring the country, and arranging car rental through GoCarRental.com enables you to find the most attractive deals and to have a car waiting for collection on your arrival at Geneva Airport.

Skiing in Verbier, in the Four Valleys - nearly 100 lifts access more than 400km of runs

Mountain sports in the Bernese Oberland

In summer, lakeside vacations are popular, and you are never more than 10 miles away from a lake in Switzerland. Lake Constance has an attractive shoreline for holidaymakers, and Zurich is well provided with mini-lidos and beaches. Summer walking in the Alps is increasingly popular, and there are a number of very well-signed trails, amongst them the “Heidi” trail in the eastern canton of Graubunden. For mountain activities – paragliding, white water rafting, glacier trekking and canyon jumping – the Bernese Oberland is the area to head for. Major ski resorts include Verbier, Zermatt, and St Moritz, but there are many other smaller and less expensive resorts to be discovered. The lover of art and culture is spoilt for choice in Switzerland; major collections include the Picassos, and Cezannes at the Rosegart Collection in Lucerne, the Museum of Fine Art in Basel, and internationally renowned museums in Zurich and Geneva.

As with so much else in Switzerland, the roads are well maintained and signposted, and given the size of the country, the tourist can easily take in some of the major cities as well as exploring the Alps and lakes on the plain. Winter driving can be more difficult, and all car rental vehicles should be equipped with snow tyres and chains, and drivers should check the local forecasts before setting off each day. Major scenic routes include the E62 which runs alongside the shores of Lake Geneva from Geneva to Montreux, and on over the Alps to Interlaken; and the E25 from Geneva, passing Lake Neuchatel, to Berne.