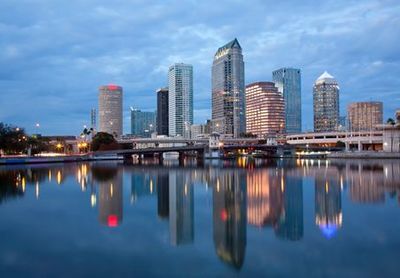 Compare & Save on car rental in Tampa

Tampa is located on the west coast of Florida, on Tampa Bay near the Gulf of Mexico, and 200 miles northwest of Miami. The city originally developed on the site of Fort Brooke, established in 1824 by four companies of the U.S. Army to protect the strategic harbour at Tampa Bay. Tampa grew steadily after the territory became part of the United States in 1845, and prosperity increased with the arrival of the railroad and the discovery of phosphates nearby. Tampa’s port is still the seventh largest in the US, welcoming cruise liners as well as exporting the produce of phosphate mining and shrimp fishing. The modern city has a rapidly growing business centre, whose glass and steel buildings dominate the bay. Visitors to the city will need a car to explore both the city itself and the region, and there are plenty of car rental companies based at the International Airport. Find the deal that suits your pocket right here at GoCarRental.com.

Things To Do in Tampa

The American Victory Mariners Memorial & Museum Ship is a world-class museum housed aboard the World War II merchant ship SS American Victory. Close to the Florida Aquarium in downtown Tampa, the museum provides a clear sense of life aboard ship during the Second World War, and the later Korean and Vietnam conflicts. The Florida Aquarium is a three-storey glass-domed building, which gives the visitor a close-up view of some extraordinary sea life, and the galleries include a Florida Wetland display, an otter river, and a coral reef with shoals of colourful tropical fish. The Tampa Bay History Center provides a 12,000 year journey through history, and the visitor will stroll through a cigar store, ride with a cattle drive, and learn about the early settlers in the region, in a magical theatrical presentation.

Exploring Hillsborough River in a hired canoe allows you to enjoy the riverscape and to spot turtles, fish and alligators in a trip that can take you almost to the Gulf of Mexico. For a great family day out, the Glazer Children’s Museum in Downtown Tampa offers loads of fun and learning for all age groups, and younger kids love the interactive displays. Tampa Museum of Art is an ultra-modern building on the banks of the Hillsborough river, housing a collection of Greek and Roman pieces as well as contemporary art. Adventure Island offers a different kind of entertainment, with a Key West style theme park with waterfalls, a giant wave pool, and corkscrew slides can provide endless fun for the whole family.

If you have booked car rental from Tampa International Airport you will need to check if your rental company is based on the airport, or offsite, in which case there are courtesy buses to take you to pick-up points. The airport is only 8 miles from Downtown Tampa, and on leaving the airport you take the Florida 589 Toll S to the 1-275 N, coming off at exit 44 for Tampa. Like many American cities, Tampa’s streets are laid out in a grid pattern, and finding your way around is not difficult once you have mastered the layout. The crosstown expressway will take you through the city to join interstate highways, if you are making a longer trip.