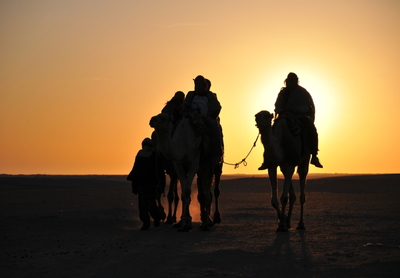 Compare & Save on car rental in Tunisia

Tunisia is a North African country with a coastline on the Mediterranean and borders with Algeria to the west and Libya to the east. The capital, Tunis, is located on an inland lake. Tunisia has a long and rich history, one of the features that makes it so attractive to tourists today. Its most famous city in ancient times was Carthage, founded by the Phoenicians, and eventually destroyed by the Romans – the Roman general Scipio was said to have wept that so much beauty had been lost. The city and surrounding country was returned to prosperity by the Romans, and was subsequently ruled by Byzantium and then the Ottoman Turks, before becoming a French protectorate in the 19th century. After the country had gained its independence from France in 1956 President Bourguiba laid the foundations of a modern secular state, albeit a country under one-party rule. President Bourguiba’s successor, President Ben Ali, left the country in 2011 after protests swept the country at the start of what has become known as the “Arab Spring” – the movement campaigning for democracy which started in Tunisia. The country now has an elected government, and the north and coastal areas have returned to peace and stability, but the Foreign and Commonwealth Office advises tourists not to visit the far south of the country or areas close to the border with Algeria.

Things to Do in Tunisia

Tunisia has an extraordinary wealth of attractions for the visitor, from historic ruins, almost complete Roman towns, and miles of golden beaches. Many tourists arrange car rental to gain the most from their visit to Tunisia, and booking online with GoCarRental.com is the best way to secure good value deals. Tunis, the capital city, is a small and compact city, easy to explore on foot. It has a Medina, an old city, and a Nouvelle Ville, and a souk that is worth visiting for bargains. The ruins of Carthage, on the outskirts of the city, and a UNESCO World Heritage site, are strategically placed with views over the ocean gulf, the city itself, and the inland plains. There’s an enormous amphitheatre, Roman baths, and an excellent museum.

South of Tunis is Hammamet, popular for its beaches and the jasmine that scents the whole town; and the historic city of Sousse, another UNESCO World heritage Site. With its walled city, medina, and golden sand beaches it’s a popular resort for tourists. Carry on down the coast and you come to Sfax, with its famous Kasbah in one corner of the Medina, and a museum with an impressive display of Roman mosaics. From Sfax you can catch a ferry to the Kerkenna Islands for a wonderful day trip. Djerba Island often invites a longer stay, with its many beaches and ideal dive spots, an enormous crocodile farm, and quiet little fishing villages where fishermen still use traditional clay pots to catch octopus.

The roads in Tunisia are good, with most signs in Arabic and English, so finding your way round tends to be easy. Some of the major highways are toll roads, and in the cities, watch out for numerous roundabouts, which are often used in place of traffic lights for traffic control. The speed limit on motorways is 110 kph. There are frequent petrol stations to be found along the coastal strip and in the north of the country, and there are car rental collection points in the major cities and airports. Hazards to be alert to are pedestrians who have a habit of stepping out into the road without looking and drivers who weave in and out of traffic ignoring overtaking rules. Driving cautiously as you get used to the (informal) rules of the road will stand you in good stead!