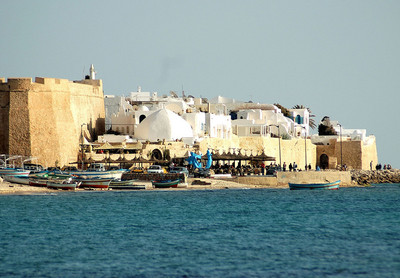 Compare & Save on car rental in Hammamet

Hammamet was the first resort in Tunisia to be developed for tourism, and it lies on the south-eastern coast of the peninsula of Cap Bon, looking out over the Gulf of Hammamet and the Mediterranean. The planning rules that were put in place – “no house should be higher than a cypress tree” – have preserved a typical North African town and architecture. There was a Roman settlement on the site of the present town, and the town was provided with defensive walls and a Medina in the 15th century. The strategic position of the town on the coast and the sheltered bay has led to it being successively ruled by the Spanish and the Turks, and during the Second World War Field Marshal Rommel made it his headquarters during part of the North African Campaign. The modern town has all that the tourist needs in the way of hotels, restaurants and the chance to bargain for souvenirs in the markets. The nearest airport is Enfida-Hammamet International Airport.

Things to Do in Hammamet

One of the main attractions of Hammamet is its beaches – miles of soft white sand, and excellent swimming. For those wanting a camel ride along the beach, there are plenty of opportunities, or some might prefer to stroll on foot to Port Yasmine. Jet-skiing and paragliding and other watersports are all available for the enthusiast. The Great Mosque of Hammamet is open to visitors (remember to cover bare arms and legs and dress appropriately) and the building externally is very impressive, with marble columns from Roman sites used in the construction. The George Sebastian Villa is a gem of Art Deco and traditional Tunisian design, and well worth a visit. Yasmine Hammamet is an up-market tourist resort adjoining the original town, with great shopping, and named after the jasmine grown everywhere in the area.

The medieval Kasbah and Medina are worth a visit, and the visitor will find stalls selling lots of attractions for the tourist. Pupput is the site of the original Roman town, and fascinating to wander around – but don’t expect guides or signs, as the site is virtually unexcavated. The town of Nabeul, a short drive up the coast from Hammamet, has a large souk and wonderful pottery, for which the area is known. Whilst in Nabeul, visit the 5th century Phoenician ruins of Kerkuane. To explore further afield car rental is essential and to get the best deals when planning a trip to Hammament research online with GoCarRental.com. Driving south will bring you to Monastir, a favourite beach resort with many, and also the site of the impressive Habib Bourguida Mausoleum and the extraordinary Roman colosseum which can be seen for miles around.

Running south from Hammamet the Trans-African Highway, or A1, is the main route from Tunis to Hammamet, Monastir and beyond, and the road from Enfida Airport also joins this autoroute. A great scenic route north from Hammamet is the C27 around the Cap Bon Peninsula (which becomes the C26 at Al Huwariyah), giving you a glimpse from the western coast of Zembra National Park, an island off the Tunisian coast. Driving in rural Tunisia is generally a pleasure, with relatively empty and well-maintained roads, but the visitor needs to be alert to pedestrians and slow-moving traffic, not to mention the occasional camel! In Hammamet itself there is a route touristique that leads along the coast towards Nabeul, but the motorist is well advised to avoid the small and winding streets in the centre of the town. Your car rental should provide you with satnav in your vehicle on request to help with finding your way around.