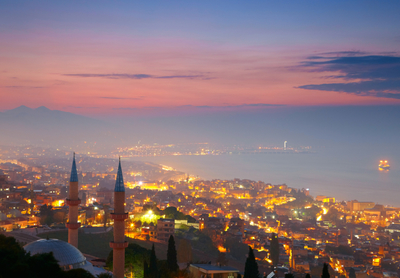 Compare & Save on car rental in Izmir

Lying on the Aegean, tucked away on the west Turkish coast, Izmir is as pretty and lively a seaside town as you’ll find anywhere on the planet. With a Jewish and Levantine heritage, İzmir stands out distinctly from the rest of Turkey, a refreshing change from the little white houses and high rise hotels one comes to associate with Turkish seaside towns. It’s Turkey’s third-largest port city, and proudly liberal, making it a cool Turkish retreat for alternative travellers.

Things to Do in Izmir

Once the ancient city of Smyrna, Izmir is now a modern, developed, and busy commercial centre. Set around a huge bay and surrounded by mountains there are plenty of broad boulevards to explore, as well as a growing number of cultural venues and for shopaholics some vast designer shopping malls too. The whole place has more of a European feel rather than Turkish, and some of the must-see sights include Konak Square, home to the city’s famous clock tower and bustling bazaar, the tiny, winding, bar-packed streets of Alsancak, and a leisurely stroll around the waterfront promenade of the Kordon.

A ferry trip to Karsiyaka

Adnan Menderes Airport is Izmir’s nearest airport, and easy 16 km drive south of the city center. It’s served by flights from Istanbul, Ankara, and Antalya, as well as cities throughout Europe. You’ll find car rental options available here, or connections into Izmir via inexpensive train or bus if you’d rather hire within the city itself. There’s plenty to explore outside this huge and bustling city too. With your own set of wheels it’s well worth checking out the very trendy Alacati (great for windsurfing), the wonderfully historical Selcuk, Tire, just an hour away and renowned for its meatballs, and Cesme, a beautiful little seaside village 30 minutes’ drive west.