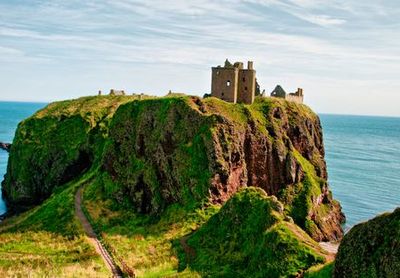 Compare & Save on car rental in Aberdeen

Aberdeen is Scotland’s third most populous city, behind Glasgow and Edinburgh, the nation’s capital. Known as the Granite City, Aberdeen’s buildings are predominantly built from locally quarried granite, which sparkles in the sunlight – hence its second nickname – the Silver City on the Golden Sands. Situated on the north east coast of Scotland, Aberdeen features long stretches of sandy beach to the east, with the mountains of the Cairngorms, the Highlands and Royal Deeside to the west. Built around the mouths of the rivers Dee and Don, there have been settlements in the area for at least 8,000 years. Since oil was found off the north east coast in the 1970s, Aberdeen has also been dubbed the Oil Capital of Europe, and this industry employs the majority of people who live in the area. The discovery of oil has led to the expansion of many suburbs around Aberdeen’s small and historic city centre. Despite its size, it is home to many green areas and parks, helping Aberdeen win the UK’s Britain in Bloom competition a record-breaking 10 times.

Things to Do in Aberdeen

Being a compact city, visitors will find it easy to cover the must-see sights. It’s hard to miss the newly-restored Marischal College on Broad Street in the city centre, one of the largest and most impressive granite buildings in Europe, which John Betjeman dubbed “a group of palatial buildings rivalled only by the Houses of Parliament at Westminster\". Just around the corner lies Aberdeen Art Gallery, as well as Aberdeen Maritime Museum. Aside from marvelling at the city’s grand granite architecture, visitors will find plenty of green spaces to explore, from the central Union Terrace Gardens to the glasshouse covered Winter Gardens at the Duthie Park.

A tour of Old Aberdeen

Footdee and the beach

Head for the beach to explore one of the prettiest sights in Aberdeen – the harbourside community of Footdee. These charming fishermen’s cottages are a great place to try and spot the dolphins that can be glimpsed regularly at the harbourmouth. An oil-rich city, keen shoppers will find plenty of upmarket designer store and eateries on offer in the city centre, while Aberdeen’s historic side is best explored with a visit to Old Aberdeen. This area of cobbled streets and unique buildings is situated around the University of Aberdeen, the third oldest university in the country, which dates back to 1495.

Getting around the city centre is relatively easy thanks to its size, but as Aberdeen makes an ideal hub from which to explore the surrounding countryside, visitors will definitely benefit from car rental for touring around the outskirts. Car rental Aberdeen is easily arranged either on arrival at the airport or in the city itself. Aberdeen Airport is located at Dyce, 7 miles from the city itself. The escape of the Scottish Highlands, as well as Royal Deeside where the royal family have their home at Balmoral Castle, is only an hour away by car, and affords astounding views of the hills and glens that surround Aberdeen. As well as offering up plenty of mountaineering and outdoor sports opportunities, there are hundreds of castles to discover in the area along the castle trail. One of the most dramatic and spectacular is Dunottar Castle, situated on the cliffs of the nearby fishing village of Stonehaven, just a 20 minute drive from the city centre.