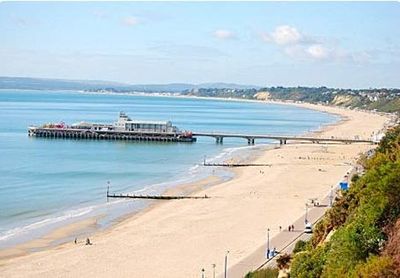 Compare & Save on car rental in Bournemouth

Bournemouth is a seaside resort, once favoured by Victorian aristocracy but now more commonly associated with retirees who flock to the town to breathe the sea air and bask in the relatively warm climate. Founded in 1810, Bournemouth was marketed as a health resort, and became a major attraction after appearing in Dr. Granville’s The Spas of England during what could be described as the first holistic health boom. The railway expedited the town’s fortunes, bringing the well-heeled from all over Britain to take in the relaxing ambience. J.R.R. Tolkein and D.H. Lawrence were among Bournemouth’s most esteemed patrons, and in Tess of the D’Urbervilles, Thomas Hardy famously described it as ‘a Mediterranean lounging place on the English Channel.’ Part of the healthful appeal lies in the aromatic lustre of the pine trees and the fresh sea breeze, and the rest is probably pure Victorian marketing nous – the Mont Dore Hotel (now the Town Hall) was said to have healing waters unavailable anywhere else in England. A big student population has, along with the gay and surfing communities, helped turn modern-day Bournemouth into ‘BoMo,’ heir apparent to the liberal, bohemian, south coast throne currently occupied by Brighton.

Things to do in Bournemouth

Since its heyday, Bournemouth has grown into a thriving resort that still offers spa treatments, either at some of the magnificent seafront hotels or the boutiques and salons that pepper the town centre. The pine scent still emanates from Bournemouth Gardens, where visitors can talk a stroll through ‘Pine Walk’. During summer, the gardens host the Pine Walk Open Air Art Exhibition, a reflection of the town’s growing stature as a place of culture and youthful vibrancy. There are, of course, the beaches – 7 miles of golden sandy ones at that – and some of the cleanest waters on the British coast (and quite comfortable to swim in during summer).

The Russell-Cotes Art Gallery and Museum has a wonderful collection of Japanese artefacts, and the University’s Atrium Gallery is worth a look. St. Peter’s Church is the final resting place of author Mary Shelly and her coffin-mate, husband Percy’s heart. Aptly ghoulish and oddly romantic. For most young people, the real appeal of Bournemouth lies in the nightlife, which attracts stag and hen parties from all over the country. The gay community centres around the Triangle area, and an O2 Academy is situated in nearby Boscombe. Although trendy bars are the norm in the town centre, there’s no shortage of ‘proper’ pubs, most notably the Goat and Tricycle, which is generally regarded as the top purveyors of real ale in Bournemouth.

The New Forest is around half an hour’s drive away, so tourists are advised to get care hire in Bournemouth and GoCarRental.com prides itself on its good selection of vehicles. Use Bournemouth as a convenient base from which to explore the coast but leave the car behind to walk the two hours along the cliffs to the lovely town of Christchurch.