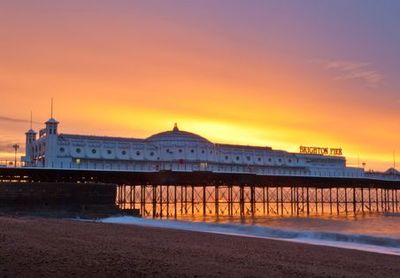 Compare & Save on car rental in Brighton

One of the most popular seaside resorts in the UK, Brighton lies on the south coast of England, just 76km due south of London. Its proximity to the nation’s capital has meant it’s always been a popular vacation getaway for stressed city dwellers and London ex-pats looking for a gentler life by the sea. One a sleepy fishing village, when a Dr. Russell started prescribing the town’s seawater as a health cure during the 18th century, it became fashionable to visit Brighton for the sake of one’s health. In the early 19th century, the then Prince of Wales erected the truly incredible Pavilion building as his home, just a stonesthrow from Brighton pier, further boosting the town’s credentials. But it was with the arrival of the railways around 1840 that the popularity of Brighton as a vacation destination really began to boom. Since then, it’s gone on to become a notably creative town, with a vibrant nightlife, music and arts scene, as well as a gay-friendly town noted for its Gay Pride festival.

Things to Do in Brighton

The first stop on any Brighton tour has to be the seaside pier. A truly traditional day out can be had, with free deck chairs available, superb views out to see and along the coast, two arcades, as well as rollercoasters, a ghost train and other amusements. Just a short stroll north is the Brighton Pavilion, its outlandishly over-the-top design makes it unmissable, and it remains a hugely popular tourist attraction – and rightly so.

Brighton is also home to some of the best shopping outside of London, with the town’s Lanes area renowned for its tightly packed cobbled alleyways, bursting with shops, and most notably, antiques centres. As well as swish designer shopping by the Lanes, there are vintage bargains galore to be had at North Laines, packed with secondhand thrift stores and crafts boutiques. Also well worth a visit is Brighton Art Gallery located just next door to the Pavilion. While fish and chips is an essential treat on any Brighton trip, you’ll also find some of the finest cuisine in the country dotted round town, including what’s claimed to be the best burger in Britain – from Troll Burger at the Hobgoblin Pub and Brighton’s weekly Street Food Market.

Brighton is quite a compact city, and so not one of the easiest to drive in. It’s heavily congested, so parking can be an issue. However, a car is definitely the best way to explore the surrounding seaside areas and popular tourist spots, like nearby Hove, Rottingdean, Arundel, and the lovely medieval town of Lewes, famous for its castle. London is just 76km away for those looking to explore the capital, or you can even hop a ferry over to Dieppe in France too. Car rental is available within the city itself, as well as at Brighton’s closest airport, Gatwick, which is just an hour’s drive away. The principal route from London and Gatwick Airport is the A23. The A27 runs along the coast, and is dual carriageway from the M27 at Portsmouth in the west to Lewes in the east.