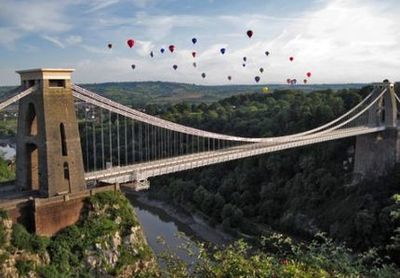 Compare & Save on car rental in Bristol

The history of the city of Bristol goes back at least to the 2nd century AD, with a settlement on the site of the present city already offering the advantages of a sheltered port and easily defended site.  Since earliest times Bristol merchants have been known for their extensive trading links and entrepreneurship, and at one time smuggling was a major contributor to the city’s prosperity.  Like many other cities in the UK it was badly damaged by bombing in the Second World War, and the centre is mostly modern, but more recently major restoration projects have revived the old docklands area and the remaining Georgian areas of the city.  One of the most brilliant of all Victorian engineers, Isambard Kingdom Brunel, has left the city the legacy of the dramatic Clifton Suspension Bridge, and the first iron-clad steam liner the SS Great Britain, now drawn up in the Great Western Dockyard, and a popular tourist attraction.  Bristol is ideally situated for the visitor to explore Wales and the West Country, and arranging car rental is essential to tour the attractions of coast and countryside.

Things to Do in Bristol

Clifton Suspension Bridge, crossing the Avon Gorge and linking Clifton with Leigh Woods, never ceases to impress the visitor, both as a feat of engineering, and for the dramatic views.  The Clifton area of the city also offers excellent music pubs of an evening, and a choice of restaurants and bistros.  A tour of the city centre with the Bristol Ferry Boat Company is an excellent way to see Bristol from the water and to gain an idea of its maritime history.

The regenerated area of Bristol City Docks is full of activities to watch and take part in – skateboarding, live air performances, and street music, as well as a wide choice of eateries.  Close by is the SS Great Britain, awarded three Michelin stars as a visitor attraction.  As well as gaining a view of life on board ship for passengers and crew, the visitor can go below the glass “waterline” to view the original iron hull.  For a fascinating interactive science centre, a trip to At-Bristol provides experience of hands-on science, with a planetarium and live shows.

Bristol is the ideal city for the visitor, offering enough to occupy the tourist for many days within the city, but also giving access to Wales and the West Country.  Arranging car rental in Bristol couldn’t be easier, with GoCarRental.com offering a choice of pick-up points in the city itself and at the airport, as well as some excellent deals on a range of models.  Satnav can help with the complications of the city centre roads, but links to other areas are excellent, with the M4 and M5 motorways meeting at an interchange just north of the city, giving easy access to London, Cardiff, Exeter and Birmingham.