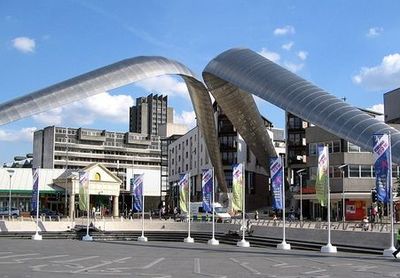 Compare & Save on car rental in Coventry

Coventry is on one of the UK’s most extensive network of motorways and rail links, giving it fast and efficient connections not only with the nearby city of Birmingham but also with London and cities further north and west. It was the world’s first twin city, forming a twinning relationship with Volgograd during the Second World War, when both cities endured massive bomb damage. Coventry Cathedral was destroyed during the war, and the world-renowned modern building incorporates some of the original structure. The city was one of the centres of the motor industry in the UK, and although many of the original companies have now gone, the industry is still an important employer in the city, and has several museums devoted to different forms of transport. There are two universities, a lively music and cultural scene, and the city is a great base from which to explore the many surrounding historic attractions, such as Warwick Castle and Stratford-upon-Avon.

Things to Do in Coventry

The Priory Visitor Centre provides a fascinating glimpse into the founding of the city’s first cathedral by the notorious Lady Godiva and her husband Earl Leofric. A visit to the modern cathedral is a wonderful experience, with the award-winning design by Sir Basil Spence, and stained glass windows by some of the most famous artists of the post-war period.

For a totally different experience, and one that the kids will love, follow in the footsteps of the Roman army by visiting Lunt Fort, a partial reconstruction of a Roman fort, housing a cavalry training centre and a museum. Choosing from the many attractions surrounding Coventry is a challenge for the visitor, including as they do historic castles such as Warwick and Kenilworth, “Shakespeare Country”, the theatre and birthplace of Shakespeare at Stratford-Upon-Avon, and the pretty spa town of Leamington. A car is essential for the visitor to fully appreciate the area, and a choice of car rental pick up places in the city is available through GoCarRental.com.

There’s an excellent choice of car rental in Coventry, and visitors staying in the city might like to take note that mastering the ring road and access roads to the city centre can be challenging. Arranging for a satnav in your hire car will significantly reduce stress! Navigating outside the city is much easier, with Coventry sitting in a triangle of motorways – the M40, which links with the M5, giving access to Birmingham, the Welsh borders and the West Country, and the M1, linking London with the north. Closer to the city, the A45 takes the visitor to Warwick, Royal Leamington Spa, and nearby Kenilworth.