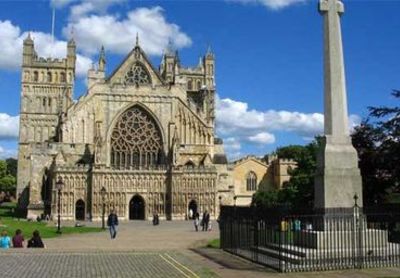 Compare & Save on car rental in Exeter

Exeter, the county town of Devon, is a historic cathedral city with an enticing blend of arts, education, retail and history. One of the principal attractions of the city is the ease with which one can get out of the urban landscape and into the surrounding countryside, which include Dartmoor, and the rest of the gorgeous West Country peninsula. Built in AD 50 as a Roman military base at a strategic crossing point on the river Exe, it was one of the earliest settlements in Britannia, emerging just seven years after the main Roman invasion. The settlement quickly became a crucial administrative centre for the legionnaires. Parts of the original Roman walls are still visible today. The city maintained regional significance throughout the Dark Ages, twice the target of Viking raids. After the Norman Conquest, Exeter’s inhabitants revolted against William the Conqueror, who built Rougemount Castle as a deterrent to future rebels. During the renaissance it developed into an economic powerhouse city thanks largely to the wool industry. The Industrial Revolution was driven by water from the river, and Exeter remained a significant seaport until the steam age. Exeter has matured into a commercial centre for agriculture, and has a population of around 110,000.

Things to do in Exeter

Exeter\'s top attraction is undoubtedly the gothic cathedral, which claims to have the longest unbroken stone roof beam of any building in the world. The Cathedral Green is a place of tranquillity, ideal for summer picnics. History abounds in Exeter, with several medieval churches to be found in the city centre, including St. Martin’s, St. Mary Arches and St. Petrock’s.

The quayside – including the 17th Century Custom House – is well worth a look, as is the 14th Century Parliament Street, which claims to be the world’s narrowest street. Much of William’s Rougemount Castle remains standing, and history buffs will likely make a beeline for it on arriving in Exeter. It’s also a University town and the beautiful campus is well worth a visit.

The centre of Exeter is fairly small and easy to get around on foot. Regular buses operate within the city centre by Stagecoach Devon, and a day pass costs £4. To explore the surrounding area properly, renting a car is essential for exploring the miles of stunning countryside and nearby coast, with scenic drives to be enjoyed in between destinations. Book your car rental in Exeter through GoCarRental.com now.