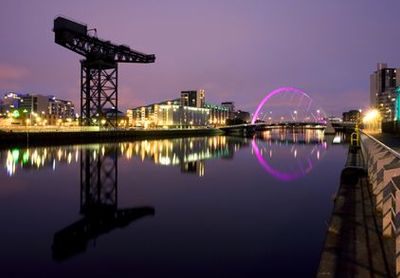 Compare & Save on cars in Glasgow, Scotland

In spite of being Scotland’s second city, Glasgow can claim the distinction of being its largest, and is built on the River Clyde, source of the city’s prosperity in the past, with its thriving shipbuilding industry.  With the demise of heavy industry the city has transformed itself into a lively centre for sport and the arts, with a thriving service and financial sector.  Proud of its sporting legacy Glasgow is hosting the 2014 Commonwealth Games, and preparations are already afoot to make it into one of the best ever.  The city’s cultural and artistic history is well-known, with houses designed by the world-famous architect Charles Rennie Mackintosh still viewable. The regeneration of the Clyde Waterfront has transformed what used to be a rundown dockland area, and Glasgow is now rated by Lonely Planet as one of the world’s top ten tourist cities.  It is also the gateway to some of the most beautiful countryside in the British Isles on the west coast of Scotland.

Things to Do in Glasgow

Merchant City was originally the residential district of the wealthy tobacco lords and city merchants, and their fine houses can still be seen.  The area has become the centre of Glasgow’s cultural renaissance, and is full of fascinating craft shops, galleries, studios, boutiques, small cafes and bistros.  As a UNESCO city of music, Glasgow offers the music lover a weekly feast of concerts and performances, covering every genre of music.

Foundation at The Lighthouse – Glasgow, the Story of a City

There are plans to get everyone singing in the run up to the Commonwealth Games, with Project Big Sing Sing.  Football enthusiasts can enjoy tours of both Celtic and Rangers grounds, and the Hampden Experience with more than 2500 exhibits related to the great game.  The Riverside Museum provides a glimpse into the history of transport, and visitors can climb aboard the tall ship “Glenlee”, built in 1896 and now lovingly restored.

No visitor should leave Glasgow without gaining at least a glimpse of the glens and lochs of the countryside some way north of the city.  For that a car is essential.  Organising car rental in Glasgow can be most easily arranged ahead of your visit, with pick-ups from the car rental locations at Glasgow Airport.  From the airport to the city is a short drive of 9 miles, taking the M8 motorway straight to the centre of the city.  The sprawling outskirts of Glasgow can sometimes be confusing to navigate, but driving in the centre, although busy, is comparatively easy once you have mastered the one-way system.  The M8 motorway will take you out of the city and joins up with the A82, opening up the stunning vistas of Loch Lomond and The Trossachs National Park, Gareloch, and onwards into the heart of the Highlands.