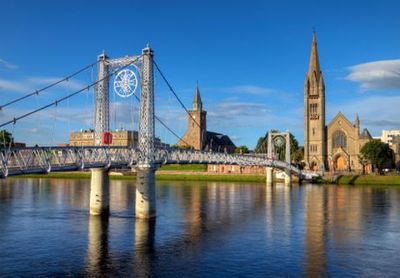 Compare & Save on car rental in Inverness

Inverness is often known as the capital of the Scottish Highlands, and it is also the northernmost city in the UK. Its history is deeply linked with that of Scotland, with the first settlement on the site being the stronghold of the Picts, the ancient race that inhabited Scotland and harried the Romans. Nearby is the Culloden Moor, the site of the historic battle in which Bonnie Prince Charlie and his army were routed, and the Jacobite rebellion ended. Inverness Castle towers over the city and the River Ness provides a tranquil balance to tales of battle and conquest as it winds its way through the city. Inverness Airport has made a significant difference to the accessibility and the prosperity of the city, which provides the base from which to explore the dramatic landscapes of the Highlands and Islands. Any visitor will want to discover the attractions surrounding the city as well as to explore the city itself, and checking our best deals on GoCarRental.com will provide a choice of car rental for a tour of the Highlands.

Things to Do in Inverness

As one of the oldest towns in Scotland Inverness has a wealth of history to explore. The Inverness Historic trail guides you past fascinating town houses, through the Victorian Market, down to the river with its souvenir shops and tranquil vistas. Inverness Castle is an imposing red sandstone edifice built in the 19th Century, although there has been a castle on the site since the 12th Century.

The Victorian Market houses some unique local shops, and has attractive covered arcades. For anyone with family connections to Scotland, the Family History Highland Archive provides a fascinating view of the history of the clans, the Highland clearances and subsequent emigration. The Groam House Museum, 15 miles north of Inverness, is the only museum in the UK devoted to the history of the Picts, and houses a unique collection of Pictish carvings and stones. Not far from Inverness is Loch Ness, and few people can resist a visit just for the chance of a glimpse of the legendary monster – and the Loch itself is extremely beautiful.

Most visitors will arrive by air, and nothing is easier than arranging car rental from Inverness airport. Choice of roads into and out of the city are limited, so it’s easy to navigate your way around the area although some of the lesser used and narrow winding roads can be challenging for drivers more used to driving in urban environments. The drive on the A96 from airport to city will take you past the site of the Battle of Culloden and provide stunning views over Beauly Firth. A trip worth taking is north of Inverness, across the Beauly Firth on the A9 to the Cromarty Bridge, giving breath-taking glimpses of the coastline and the mountains.