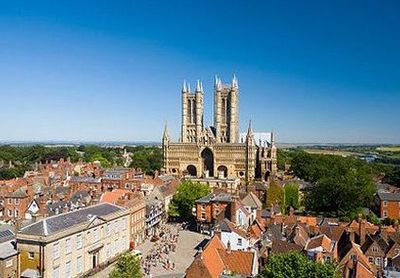 Compare & Save on car rental in Lincoln

Evidence of the Roman founding of the city is everywhere in Lincoln. The Romans originally built a fortress on the site of the city in AD 50, and Ermine Street was a key highway connecting with York and London (now the main A50 road). With the arrival of the Normans, William the Conqueror ordered the building of Lincoln Castle, and the cathedral was consecrated in 1092. The central tower of the cathedral was once claimed as the tallest building in the world until it blew down in a storm in 1549. The wealth of the city was founded on the wool trade, and the Lincoln green cloth made famous by Robin Hood and his outlaws. The first ever tank was designed and built in Lincoln, and an example can still be seen in the Museum of Lincolnshire Life. The city was an early advocate of the agricultural revolution, and had a thriving agricultural machinery industry. One of the many attractive features of the city is Steep Hill, which connects the upper and lower quarters, and contains many historic buildings. The High Street Quarter offers a great shopping experience to the visitor, with a mix of large retail outlets, small boutiques, and great bars and eateries.

Things To Do in Lincoln

A visit to the magnificent Gothic cathedral that dominates Lincoln’s skyline has to be high on every tourist’s list. Roof and Floor tours are run throughout the year, which enable you to view the stunning stained glass windows up close, and view the intricate stone carvings as well as the famous Lincoln Imp. The historic centre of the city is full of fascinating buildings, including the Jews House, believed to be the oldest example of a town house in Britain. Lincoln Castle houses one of the four surviving copies of the Magna Carta, signed by King John in 1215, providing the foundation of constitutional law in England. Tours of the castle not only give a view of its history but include a visit to the Georgian and Victorian prisons built within its walls.

A different way of exploring the city and surrounding countryside is offered aboard the Brayford Belle, where you can enjoy an hour’s cruise down the Fosse Dyke Canal, which runs from the Brayford Pool in Lincoln down to the river Trent at Torksey and is believed to be the oldest working canal in the country. Just outside the city is Doddington Hall, a very fine example of an Elizabethan mansion which is still lived in by descendants of the family who built it. It offers an amazing insight into life down the centuries in a house which is both a showpiece and a family home.

The centre of the city is easily explored on foot, and most visitors will choose to do so in preference to driving around some rather complicated one-way systems. But with the wealth of stately homes and castles to explore in the area, a car is a must, and car rental in Lincoln is easy to arrange through GoCarRental.com. There are excellent routes to Lincoln on the AI to Newark and the A46, which takes you direct to the city. The A15 running north from Lincoln to join the M180 motorway provides the visitor with easy access to Hull and Doncaster.