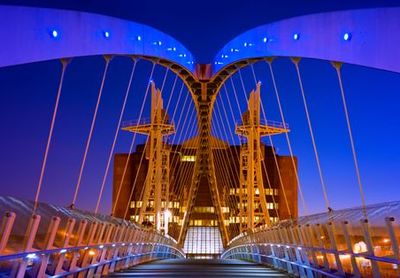 Compare & Save on car rental in Manchester

Manchester is a city of firsts – the site of the world’s first railway station, where scientists first split the atom, and where the first stored-programme computer was developed.  Not forgetting, of course, that the Industrial Revolution had its birth in the city.  The prosperity that industrialisation brought in Victorian times is reflected in many of the cities impressive red-brick buildings – not least the Gothic Town Hall building with its mosaic floors decorated with bees, symbols of industry, and wall murals by Ford Madox Brown.  The Royal Exchange, with its impressive over-arching entrance, has solved the problem that bedevils redundant historic buildings by creating a theatre inside the original walls.  Manchester has seen the birth of many UK music groups over the past three decades, including The Smiths, Stone Roses, Simply Red, and the city has given its name to the post-punk style known as “Manchester music”.

Things to Do in Manchester

Gain a sweeping panorama of the whole city and the country beyond through the floor-to-ceiling windows at Cloud 23, on the 23rd floor of Beetham Tower.  Sipping a cocktail at the bar and watching as the daylight fades and the lights come on all over the city is an experience to remember.  Manchester hosts numerous festivals celebrating the multi-cultural persona of the city, with world music events, rock festivals, and an annual experimental electronic music festival.  As the home of one of football’s most famous teams, there are lots of opportunities for the visitor to learn more about the history of the beautiful game by joining a guided tour of the stadium and grounds of Manchester United, or visiting the National Football Museum.

And the artist whose quirky matchstick figures did so much to spread Manchester’s reputation as a city of art, LS Lowry, has his own arts centre which houses not only a permanent collection of his own paintings, but also a theatre, and photography and sculpture galleries.  With Cheshire and Liverpool to the west and the Peak District to the east, Manchester also offers the tourist a chance to explore the region more widely, the best option being to organise car rental ahead of your visit.

For the visitor the city is easily accessible from the airport, and Manchester is a relatively easy city to navigate, the ring road or Mancunian Way, giving access to different parts of the city.  Having arranged car rental and picking up from Manchester Airport, the route to the city centre follows the M56 before crossing the M60 and becoming the A5103.  Roads out of the city lead off the ring road in every direction like the spokes of a wheel, making it easy to head out to explore more widely.  Places to visit might include the black-and-white Tudor town of Chester, 40 miles away on the M56, or heading south east on the A6, the picturesque villages and striking scenery of the Peak District National Park.