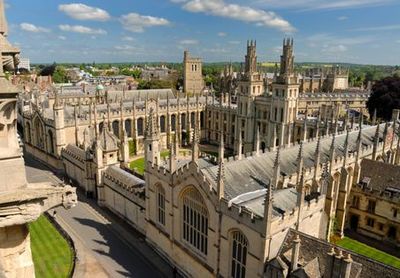 Compare & Save on car rental in Oxford

At only an hour and half’s drive outside central London, most international tourists don’t need much persuasion to visit the oldest University town in the English-speaking world. Located on the banks of the rivers Thames and Cherwell, Oxford has been at the vanguard of British academia for nearly a thousand years. It’s famous ‘dreaming spires’ are rightly iconic, all the more for stretching out from such esteemed establishments as Christ Church and the Bodleian library. First occupied during Saxon times, Oxford had become a crucial military frontier by the 10th century, dividing the kingdoms of Mercia and Wessex. But it was the founding of the University of Oxford that turned the town’s fortunes from military target into a haven of education and enlightenment. Comprised of some 40 colleges and associated buildings, each with its own character, the University charts a course through British architectural history from the 13 Century to the modern era, and records the activity of a millennium when fervent religious faith and high academic endeavor were bound together. Consequently, tourists can visit some of the world’s most impressive seats of learning and churches – all in the same building.

Things to do in Oxford

Unsurprisingly, most places of interest in Oxford centre around the University, right down to the old public houses whose low timber roofs skirt the edges of the famous colleges. Some colleges are closed to tourists, others act more like the public face of first-class education, a sort of Disneyland for boffins the world over. Magdalen and Christ Church fall into the latter category, complete with visiting hours, facilities and admission fees, while the Bodleian is both a functioning research library and a major tourist attraction. Its collection – one of the oldest in Europe – dates back to 1602. Older still is Worcester College which has some of the most beautiful grounds of any university, anywhere. The only college with a lake, it also has a stunning main quad, built in the 15th Century, and a series of charming medieval cottages for its elite students.

Outside the university is the Ashmolean Museum. Founded in 1683, it is Britain’s oldest public museum, and displays exhibits from ancient Egypt, Greece and Rome, as well as a fine collection of Western art. Unlike Magdelen College, entry is free. The Museum of Natural History is closed until 2014, but anyone planning a trip next year can expect to see the University’s impressive collection of Zoological, entomological, geological and palaeontological specimens, collected over the last three centuries, not to mention the famous Oxford Dodo. The Turf Tavern is well worth a look, serving up meaty side plates and guest ales. The eagle-eyed will find a plaque outside that claims the pub as the venue where Bill Clinton did not inhale in the seventies…

The pleasure of Oxford lies in strolling from café to quad to museum to pub, but visitors coming from London are advised to drive the 50 miles along the M40. Car rental in Oxford will also allow you to head towards the West Midlands, and another great British city, Birmingham. GoCarRental.com has a comprehensive selection of vehicles. Beware of parking restrictions in the city itself – a hire car is best left on the outskirts of town or at a hotel. Buses are a good way to reach the outer limits of the city, and generally don’t cost more than a couple of dollars.