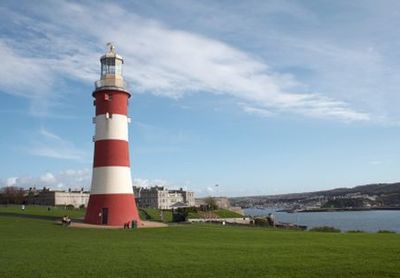 Compare & Save on car rental in Plymouth

Built on one of the world’s most impressive natural harbours, Plymouth is situated at the confluence of the rivers Tamar and Plym. The area’s history literally goes back as far as the written record, with the Domesday book logging ‘Sudtone’ in 1086, the town that would become Sutton and, together with Devonport and Stonehouse, merge to form Plymouth. The settlement of Mount Batten goes back further still, with excavations unearthing Bronze Age artefacts. As an old port on the wave-ruling British Isles, it has a rich history: Sir Francis Drake left England from here on his way to defeat the Spanish Armada, and the city lent its name to Plymouth Rock in Massachusetts after the Pilgrim Fathers escaped European religious persecution in 1620 to find freedom in the New World. Like most of Devon, the surrounding landscape is characterized by rugged cliffs making way for rolling hills and Dartmoor, which was designated a National Park in 1951. Nearly 12 million annual visitors swell Plymouth’s modest quarter-million population, and it is the perfect base from which to rent a car and explore the gorgeous Devon and Cornwall coastline.

Things to do in Plymouth

Hire a car and use Plymouth as a launch pad for exploring Britain’s West Country. Most visitors will want to see Dartmoor, which is home to historic sites including lighthouse Smeatons Tower, Mount Batten Peninsula where the earliest settlers lived, Sir Francis Drake’s former home at Buckland Abbey and the National Marine Aquarium, the deepest in Europe. Also nearby is Plymouth Hoe, the scene of Drake’s apocryphal pre-victory game of bowls.

The Royal Dockyard, built in 1690, is the centre of Plymouth’s seafaring tradition and remains home to the largest naval base in Western Europe (open to the public on Naval Days). The Barbican is Plymouth’s historic centre, full of art galleries, restaurants and shops. It is also used frequently as a filming location, most notably for Ang Lee’s 1999 take on ‘Sense and Sensibility’. The Mayflower Steps is a site of monumental importance, marking the point of departure for the Mayflower. The famous ship’s occupants are thought to have stayed in the Plymouth Gin Distillery prior to leaving for America, and visitors can still sample its wares to this day.

Walking is essential in Plymouth and the surrounding area, but getting to some of the more appealingly remote walks requires car rental. GoCarRental.com has a comprehensive selection of vehicles. Once you’ve got wheels and a place to stay, drive along the coast to explore the remarkable countryside and to get the most of Dartmoor. The more time you have the better – this part of England opens up a whole world of wonder with ales and cider to oil the wheels and fabulous views that give you an idea of what it must have been like to stand at the edge of Europe in the 16th and 17th Centuries and contemplate heading west across the Atlantic for adventure, fortune and glory.