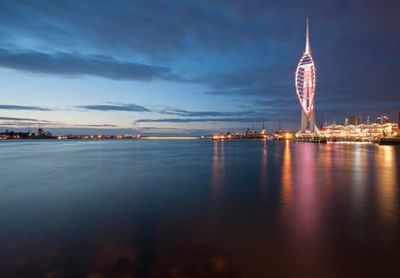 Compare & Save on car rental in Portsmouth

With a densely packed island population of less than 200,000, Portsmouth – or ‘Pompey’ to locals – has played a key role in the British Empire, its influence far exceeding its size. According to Winston Churchill’s A History of the English Speaking Peoples Portsmouth was founded in 501 by a pirate named Port, although less imaginative historians put a date of 1180 on the settlement. The town went on to become a strategic stronghold during the English Civil War, and the father of the Royal Navy Robert Blake used it has his main base during the Anglo Spanish War and the Anglo Dutch War. The first fleet to colonize Australia set sail from here in 1787, marking the beginning of the penal colony system in Europe, and Admiral Nelson left the port in 1805 to command the Trafalgar-busting fleet. Lord Nelson’s flagship, the HMS Victory, is housed here, as is the Mary Rose – all testament to the city’s status as the most fortified in Europe. Engineering titan Isambard Kingdom Brunel and author Charles Dickens are among Portsmouth’s famous sons, and other literary figures were attracted to Portsmouth over the years, including HG Wells, Arthur Conan Doyle and Rudyard Kipling.

Things to do in Portsmouth

Situated in the naval base, the Historic Dockyard is home to the Mary Rose, HMS Victory and HMS Warrior 1860. The Royal Naval Museum and Action Stations take a look at the history of the British Navy, and guests can retire to the Ship Anson for a pint afterwards. The Spinnaker Tower is a flagship of its own, leading Portsmouth’s regeneration as a redeveloped harbor and commercial hub.

Southsea Castle, built in 1544, was part of a string of fortification built by Henry VIII to protect his country from invaders. The two cathedrals, St. Thomas’ and St. Johns’, are as fine a pair of cathedrals representing Anglican and Catholic denominations as you will see in any one city, and the Charles Dickens Birthplace Museum is a must-see for any fan of great British literature. Night owls are well-served by Gunwharf Quays, which boasts over 20 bars and restaurants, many with waterfront views, and Albert Road is popular with students and curry fans.

Portsmouth is small and tightly packed, but car rental is essential if you want to explore the mainland. Portchester Castle, one of the most well preserved Roman fortifications in Northern Europe, is around 5 miles away, and Portsdown Hill offers amazing views across Portsmouth and the South Downs. Portsmouth is easily accessible by car on the M275 via the M27 and A27. GoCarRental.com has a good selection of vehicles, and remember that the city observes a strict 20mph speed limit unless signposted otherwise. Parking is plentiful and, at about £1 per hour, relatively cheap in pay-and-display car parks.