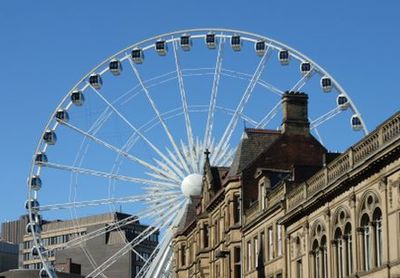 Compare & Save on car rental in Sheffield

Sheffield’s 552,000 residents make it one of the UKs biggest cities, and well worth a visit for anyone interested in Europe’s industrial heritage. Despite its reputation as a centre of industry, it actually boasts some of the most expansive green open spaces of any British city, with trees outnumbering people by three to one. Nestled in between seven South Yorkshire hills, Sheffield owes much of its past to this special topography. The city began as a network of commercial towns and villages whose economies were fueled by the fast flowing rivers and streams bringing water down from the Peak District. Dams harnessed the water, which was used to power the mills that made this part of England famous. Many of these old dams can still be found today by driving out of the city along Porter Valley. These diffuse settlements were brought together by the railways which accelerated the burgeoning metallurgy trade, prompting an explosion in heavy industry. Although Sheffield’s iconic blade and cutlery manufacturing declined during the 1980s, one thing has outlived the great steelworks of the post-industrial age, and that is the city’s warmth and humor - even the most coolly detached interloper can expect to be called ‘love’ by a local at least once during their stay. Bombarded during the blitz, Sheffield today is finding its feet as a cosmopolitan northern destination with great access to the Peak District as well as other major cities like Leeds, Liverpool and Manchester.

Things to do in Sheffield

Sheffield has carved out a name for itself as one of the UK’s top shopping destinations, with the Meadowhall mall (once the country’s largest shopping centre) attracting more than 30 million visitors each year. It’s no slouch on the cultural front either, with the Graves Gallery on Surrey St housing works by artists whose work forms the cornerstone of contemporary visual language like Picasso and Cezanne, as well as British luminaries like Stanley Spencer.

Tudor Square is home to the Victorian-era Lyceum Theatre, the Central Library, and the famous Crucible, venue of the World Snooker Championships. Formerly one of the largest in England, Sheffield Castle was demolished by Cromwell in 1646, but its ruins are worth a look. The botanical gardens have been recently restored, and include grand conservatories designed by Sir Joseph Paxton, the architect behind the Crystal Palace. Another important Victorian site is the Sheffield General Cemetery, the final resting place of the city’s most influential citizens such as chartist Samuel Holberry and steel magnate Mark Firth.

Sheffield sits next to the M1, and car rental is recommended to allow easy passage between Sheffield and the surrounding attractions (although the city centre itself is navigable by foot and public tram). For car rental in Sheffield, take a look at our extensive range of rental cars to suit all tastes and budgets. Using the M1, you can easily connect with the M62, which leads you on to North Wales, Liverpool and Manchester. Drive east to Hull and a stay in Sheffield could easily turn into a ferry-ride to mainland Europe.