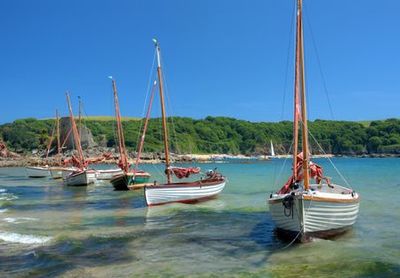 Compare & Save on car rental in Torquay

One of the three towns of Torbay, Torquay is located 22 miles south of Exeter. The area has been settled since paleolithic times, but gained its reputation as a seaside resort during the early 19th Century, when it was frequented by Naval officers during the Napoleonic Wars. The Victorian elite favoured Torquay as a health retreat, and dubbed itself ‘the English Riviera’ – somewhat pompously, if we are to believe John Cleese’s version of the town as depicted via nightmare hotelier Basil Fawlty. But Cleese’s jabs at the town must surely have been affectionate, because Torquay officially has the best beaches in England, boasting no less than nine sandy beaches, three of which hold European Blue Flags. The area also enjoys an unusual micro-climate, and newcomers might be surprised to see the closest thing England has to palm trees dotting the seafront (not actually palm trees, but the rather less glamorous-sounding cabbage tree).

Things to do in Torquay

Perhaps living up to its self-styled ‘English Riviera’ status after all, foodies are in for a real treat in Torquay. The town’s unique location and climate has fostered some fabulous seafood, used to great effect by the excellent chefs that have taken up residence here. They employ everything from French, Italian and Spanish to Indian, Thai and Moroccan flavours, and everything is imbued with a distinct West Country note. Their efforts have earned Michelin Stars and AA Rosettes, and even the fish and chip shops are award winning. Those aforementioned beaches (Maidencombe Beach, Watcombe Beach, Oddicombe Beach, Babbacombe Beach, Anstey\'s Cove, Meadfoot Beach, Torre Abbey Sands, Corbyn Sands) may not live up to the Seychelles, but if you’re planning a British beach vacation, they simply cannot be beaten anywhere on the isles.

There’s more to Torquay, though, than food and beaches. Kent’s Cavern is the UK’s most important Stone Age site, with evidence of primitive man’s presence dating back 450,000 years (modern humans also lived here from around 40,000 years ago). The Babbacombe Model Village is a surefire hit with kids, and tethered balloon flights provide aerial views of the town.

Torquay can be reached from everywhere by rail, but the motorway network and a hire car affords you the freedom to explore this part of England more fully. The A380 encircles the town, and the M5 takes you on to Exeter and beyond. GoCarRental.com has a good selection of hire cars in Torquay.