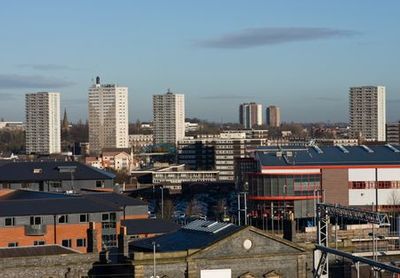 Compare & Save on car rental in Wolverhampton

Wolverhampton is situated north-west of Birmingham, and gets its name from its founder, Lady Wulfrun, who established the town in 985. In modern times it has grown to be the 13th most populous city in England. The prosperity of the city was originally built on the woollen trade, but it then became an early adopter of metal working, a growth industry from the 16th century. The traditional metal working skills of the workforce and the location of the town in the centre of the country contributed to its becoming a base for car manufacturing in the 20th century. Wolverhampton was awarded city status in 2000, when it was declared a “Millenium City”, along with Brighton and Preston. The first car to reach 200mph and break the land speed record in 1927 was a Sunbeam built in Wolverhampton. The city has a number of art galleries and museums, and a vibrant music scene. Close to the city of Birmingham, it benefits from good transport links, with Birmingham Airport close by, and the M54 and M6 motorways giving access to the Welsh borders and the North of England respectively. Visitors may want to combine taking public transport to explore the town and nearby Birmingham with arranging car rental to explore outside the city limits.

What to Do in Wolverhampton

The city is rightly proud of its two main theatres, the Grand and the Arena. The Arena is the West Midlands most successful small-scale touring venue, while the Grand lives up to its name with its porticos and pillars on the exterior, and is known for the consistently high quality of its shows and the range of entertainment offered. Bantock House Museum is described as one of the city’s hidden gems, a fully restored Edwardian house displaying the history of Wolverhampton and its people, set in acres of grounds. Wolverhampton Art Gallery has a frequently changing series of exhibitions, and holds one of the most important collections of Pop Art in the country.

Coalbrookdale – birthplace of the Industrial Revolution

For lovers of roses the David Austin Plant Centre and Rose Garden are not to be missed, with displays of the many glorious old-fashioned roses that the firm is famous for. Sporting fans might like to visit Wolverhampton Racecourse, or the museum attached to the famous Wolves FC ground. Also, with the car rental deals from GoCarRental.com visitors can explore further afield. A great day trip is to take the M54 to the historic border town of Shrewsbury, built on a loop of the River Severn, with its narrow streets and black-and-white timbered houses, and the famous Shrewsbury Abbey. Just off the M54, Coalbrookdale and the Ironbridge Gorge offer a fascinating tour of the birthplace of the Industrial Revolution in England.

The motorist is well advised to equip themselves with a satnav to drive around Wolverhampton, as getting around the city and Birmingham close by can present a major challenge. Once outside the city, the road links are excellent, with the M6 motorway running to the north-west and picking up the main motorway networks to the south-east and west of England outside Birmingham. The M54 is the route to take to Shrewsbury, Shropshire and the Welsh borders. Coming from Birmingham Airport, the M42 joins the M5 to take visitors past Birmingham and joins the M6 to Wolverhampton.