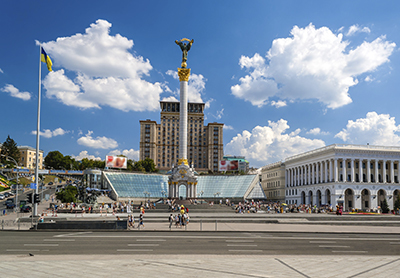 Compare prices and save money on your car rental in Kiev

It’s charming, it’s lively, and it’s multi-ethnic. In spite of not being mentioned in the top touristic destinations, Kiev can surprise you. The ancient city center offers a huge number of sights and architectural samples of the highest level of beauty. Buildings dating back to the beginning of the twentieth century lie side by side with soviet constructions and majestic buildings now used as offices. The modern city center and the old town are both located on the Dnipro River’s western shore, where along with the Poli and Pechersk quarters we can find the commercial heart of contemporary Kiev, vulytsia Khreshchatyk and maydan Nezalezhnosti, or more simply “Independence square.” The old town is instead located near Zoloti Vorota and Saint Sophia’s Cathedral. The latter is a sumptuous church named UNESCO World Heritage Site. Inside, you can gaze at its ancient decorations, its mosaics, and the original eleventh-century frescoes. Saint Sophia’s Cathedral is really a jewel on the crown of this beautiful city. The left bank of the river, and in general the uptown quarters, is composed by numberless stern and grey buildings. Because of the location and complexity of many sights in Kiev, which often require some time of meditation, a rental car is the best choice