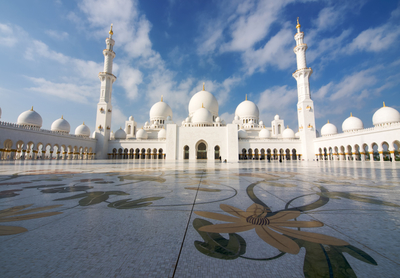 Compare & Save on car rental in Abu Dhabi

Abu Dhabi is the capital of the United Arab Emirates as well as being a major financial and cultural centre. The modern city has been built on a wedge shaped island on the western coast of the Persian Gulf. The name translates literally as “father of deerµ, thought to refer to the gazelle that roam the territory. With the dispersal of the Bani Yas Bedouin tribe from their traditional oasis at Liwa in the 19th century, one branch of the tribe settled in Dubai and the Al Nahyan family became the rulers of Abu Dhabi. The Persian Gulf was the centre of the pearl trade and Abu Dhabi gained its prosperity from pearl fishing, and later from oil and tourism. The emirates came under the umbrella of the British towards the end of the 19th Century, providing them with protection from the many pirates raiding the area. When the British withdrew in 1971 Abu Dhabi joined with Dubai and five smaller emirates to form the United Arab Emirates. The city is currently experiencing a construction boom, with two major international museums planned and the stadium that will host some of the 2017 World Cup games.

Things to Do in Abu Dhabi

Abu Dhabi is a shopper’s dream, as well as offering miles of white sand beaches and some of the most luxurious hotels in the world. Motorsports enthusiasts will want to head to Yas Island for its world-class racing track, and for traditionalists the Camel Racing Track is an entertaining and exciting visit. The Corniche stretches for miles along the seafront, with numerous shopping malls and sandy beaches along the way. The major shopping malls are the Marina Mall, with a magnificent musical fountain, Abu Dhabi Mall, and Al Wahda Mall, the best place to go to sample a vast array of food.

For outdoors activities, try dune buggy driving with expert Desert Drivers, or arrange to rent a 4X4 through GoCarRental.com for your Abu Dhabi visit, giving you the freedom to go off-road outside the city. Alongside the skyscrapers of the modern city, the area is also rich in history : the early Christian monastery recently discovered on Sir Bani Yas Island is a fascinating glimpse into the past. Al Jahili Fort at Al Ain is an impressive landmark, and currently houses the work of the British explorer Wilfrid Thesinger, who made his life’s work the study of the Bedouin tribes in Arabia and the Marsh Arabs in Iraq. The Sheikh Zayed Grand Mosque is one of the world’s largest mosques, with 82 domes, 24 carat gold gilded chandeliers, the largest of which weighs in at 12 tonnes.

The roads in Abu Dhabi are excellent, although visiting drivers find that it takes time to adapt to the fast and aggressive driving. Expat locals recommend staying in the inside lane and looking out for drivers executing U-turns (perfectly legally) at intersections. A satnav is essential for your car rental, as road numbering and signing is eccentric, although the current administration is working hard to create a more logical system. The five lane motorway between Abu Dhabi and Dubai, the E11, gets busy at rush hour, so is best avoided at peak times. The route in to the centre of the city from the airport is an easy 30 minute drive, the airport road joining the E20 which leads over the Al Maqta Bridge in to Abu Dhabi City.